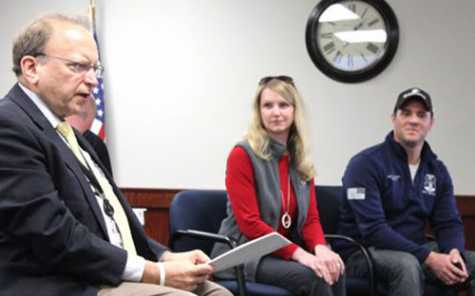 Legislators say they are closer than ever to reaching an agreement on auto insurance reform, but they remain uncertain what the final product will look like.

“We want to make sure everybody is educated and that we are transparent,” Chairwoman Miranda Sharp Boisseau, Republican Party chairwoman, told the audience of about 20 people. “I think it’s important to give citizens the opportunity to learn and be informed. Keeping government transparent to the voters is one of our goals.”

Earlier this month, the Michigan House and Senate each approved their own versions of auto insurance reform plans they say would fix many issues: reduce rates and give drivers more choice on personal injury protection coverage, stop price gouging on medical services for car accident victims and combat fraudulent claims to help lower costs. The proposals are aimed at ending Michigan’s long-standing tenure as the state with the costliest car insurance rates in the nation. Michigan is the only state which mandates unlimited lifetime health care coverage through car insurance.

“We have a three-tiered system, if you will, we have those who can afford this expensive health care — auto insurance policy’s a very expensive health care portion of it — and then there’s those that can’t afford it and they drive without insurance, and then we have those that move out of the state,” Albert summarized. “It’s not a very good set of options for people in Michigan to have. What the goal of the bill is, is to add choice and options, let’s add some options that people can actually afford.”

“I think this speaks very highly of leadership in both chambers (House and Senate),” Calley agreed. “This is two bodies who really want to make a change that people have been asking for that we believe is overdue. We are the only state that says we know better than you. We’re going to tell you what you have to purchase. You don’t run into that with your life insurance, your health insurance, your homeowners’ insurance. This is an anomaly.”

Bizon said the House and Senate are close to reaching an agreement: “This is the closest that we’ve ever been.”

“There are still some changes that I’d love to see,” Bizon said. “I don’t think this is our very best product when it comes to making it as cheap as possible, but in politics, it’s the art of possible rather than the art of what is actually best. If we make further changes, the concern is that there are a number of people on the House side that would not be willing to go along with us."

“Your real question is, how close are we to getting the governor something to sign?” Bizon cautioned. “We had caucus together on May 16 and we’re trying hard to make sure that we have something she can sign, but by the same token, we aren’t willing to give up your savings in this program. Some of the things that she is requesting is going to affect your rates. I would anticipate that no matter what we send to her, she’s going to have the option of vetoing it and then she can explain to you why she did it.”

Albert addressed concerns about red-lining, the practice of refusing a loan or insurance to someone, because they live in an area deemed to be a poor financial risk.

“What that means is they’ll claim the use of non-driving factors to set someone’s auto rate is unfair, which it can be if it’s done in the wrong way,” Albert said. “They’ll say your zip code shouldn’t determine what your rate is, your gender shouldn’t determine what your rate is. So one thing we added in this bill, which differentiates us from the Senate, is a specifying statute that auto insurers are not able to use factors that cannot reasonably be explained. They have to explain it to DIFS (the Department of Insurance & Financial Services), which is the insurance regulator in the state of Michigan which is run by the governor."

“The thing about zip codes that people don’t really think of, the risks of driving in Ionia County are different than that of Kalamazoo or Flint or the city of Detroit,” Albert noted. “More people in the car equals more risk. That’s why where you live matters. That’s why it was addressed in our bill and I think it’s fair.”

“Is her concern valid, I guess is what I’m wondering?” Butler asked.

Calley’s husband, Brian Calley, was present in the audience and weighed in on this.

“It’s a turf thing,” the former lieutenant governor said. “It’s an authority that rests with the Attorney General now and it would be moved. You do have to keep in mind that the Attorney General has very directly said that some laws if she doesn’t think she agrees with, she’s not going to enforce."

“This is clearly a priority of the legislature, so naturally they want to make sure it is enforced,” he added.

People who choose to opt out will see 100% personal injury protection (PIP) rollback and save an average of $1,200 per year.

People who choose unlimited (no change from current) will see 10% PIP rollback and save an average of $120 per year.

A new fee schedule prevents widespread abuse and patients being forced to pay three or four times what a medical service actually costs.

New limits on attendant care stop one of the most common abuses and frauds that drive up costs for everyone else.

Choices for drivers: Adds the unlimited option (no change from current) and the $500,000 option.

We thank The Daily News for reprint permission.