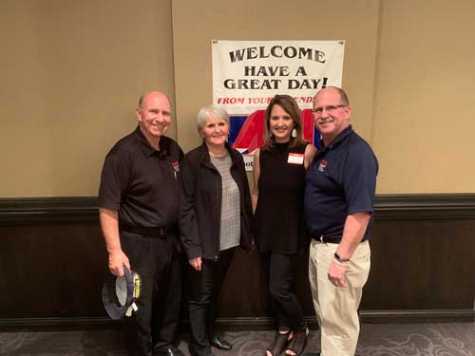 Held at Syberg’s in Maryland Heights, MO, the party was planned by Gene’s wife, Barb; his son, Doug; and daughter-in-law, Sheri Slattery. Gene’s daughter, Kris, and her husband, Dave Leshovsky, drove in from Kansas City to attend the retirement party.

AASP-MO Executive Director Ron Reiling shared, “Gene is so badass in our industry that Chuck Norris has Gene’s picture on his wall. It was a wonderful celebration of a great friend and colleague who loves his customers and the automotive repair industry and who works tirelessly to bring young people into this industry. Gene is a true industry advocate who loves this industry.”

More than 75 industry professionals, friends and family members were present to celebrate Gene’s efforts throughout his automotive industry career, which has spanned more than 50 years. Many attendees took the microphone to thank Gene for all he has done and continues to do for the industry. One of the highlights of the evening was Doug’s PowerPoint presentation detailing his father’s career.

Gene began his career in 1965 when he purchased a Pure Oil Service Station at the age of 20 years old.

He shared, “I was the only 20-year-old who owned a service station in Wisconsin since you had to be 21 at that time. They turned me down when I was 19, and one year later, the guy they put in the station went broke, so Pure Oil agreed to make an exception for me. I sold my 1963 Ford Fairlane convertible that I loved and bought a pickup truck, which impressed the banker so much that he was willing to loan me what I needed to open the service station. I had to learn everything and went to all training programs to learn how to diagnose and repair vehicles. I joined an automotive association right away and became a great supporter.”

Having bought from the company, Gene became a sales representative for Sun Electric Corporation several years later and eventually went on to become its regional sales manager.

View the embedded image gallery online at:
https://www.autobodynews.com/index.php/midwestern/item/17452-mo-automotive-community-celebrates-gene-slattery-s-retirement.html#sigProIdca98d42a17
More in this category: « Collision Repair Shop Owner Returns to Avon, IN, as a Top Custom Car Builder Stivers Ford Lincoln Expands With New Collision Center in Waukee, IA »
back to top