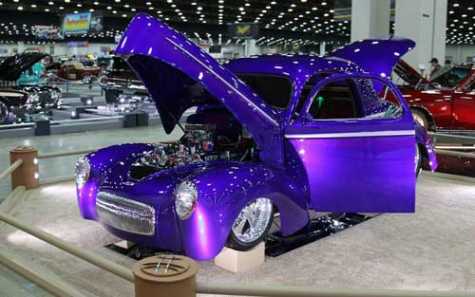 Building it himself, Walberts said, allowed him to have a little over $100,000 in the car, but if he had built it for someone else or hired someone, it would have cost closer to $500,000.

The Great 8 was announced in late March before the Riddler (top prize) was announced a few days later. Walberts wasn’t even in the room when his car was “flagged” as a winner.

“When we walked in the door Friday morning, the flags weren’t displayed yet, so we sat by the car for about a half-hour or so, and I didn’t know if I wanted to sit there and watch the judges put the flags in the displays," he said. "We left and went to breakfast and when we came back an hour later, I had a flag in my display. That’s when the media started swarming.”

He rests on knowing he’s one of the best custom car builders out there. The accolades have also helped his business.

“After I made it, it opened a lot of doors," Walberts said. "McGuire’s Products wants to sponsor me for a year and I was invited to the Builders Showcase in Louisville, KY, in a few weeks. If you receive an invite, you can advertise your shop.”

The blue/violet color of the Willy stands out. Walberts said, “People just gravitated to it. I’m even impressed with it. I knew it looked neat but didn’t really grasp how neat it would look on the car.

“It’s crazy how it works; inside it looks like a blue or violet color but outside it looks violent and magenta when the sunlight hits it. It’s from the different pearls that I used to create the four-stage effect.”

Now that the car has been in competition, Walberts said he’ll continue the indoor circuit for a year and eventually switch to outdoor events, but he’s already got another project in the works.

“Eventually, I’ll enjoy this one more and drive it down the road," he said. "At that point, in a few years, I’ll be ready for a new one.”