At Jerry’s Body Shop in Mankato, MN, Going Green Has Always Been a Focus 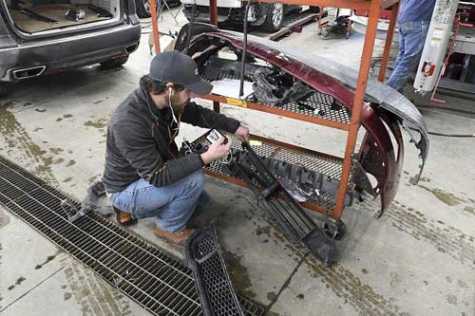 Kyle Reedstrom does a video chat on his phone with an adjuster in the shop at Jerry's Body Shop. Pat Christman, The Free Press

Going green as a business strategy comes in many different forms. Some of the more obvious examples are recycling and using energy-efficient light bulbs or solar panels.

Jerry’s Body Shop, which has been a Mankato, MN, mainstay to a loyal network of customers since 1971, has built a reputation for its innovative approaches to being environmentally friendly.

The big change the body repair shop made was incorporating the use of water-based paints instead of solvents whenever possible. Solvents have been shown to be a key contributor to ground level ozone, according to the U.S. Environmental Protection Agency (EPA), exacerbating damage to the lungs and throat.

“With the waterborne paint, we’re about 75 percent less hazardous waste disposal on the paint,” said Geri Kottschade, who co-owns Jerry’s Body Shop with her husband, Jerry Kottschade. “We’ve been waterborne for about seven years now and have definitely seen a decrease in the byproducts and the gun washer as well. You don’t have that harsh chemical going through the gun.”

There has been an uptick in demand for waterborne paint in the automotive industry as states have lined up to curb the uses of industrial solvents. Eleven states currently regulate the amount of volatile organic compounds that solvents emit into the air, although Minnesota is not included.

Cathy Rusnak, segment communications manager for PPG Industries, the company that supplies waterborne paint to Jerry’s Body Shop, said many companies are making the switch without any regulations requiring them to do so.

“What’s amazing to us is it began as a way to meet regulations, but we have a lot of shops that don’t have to meet regulations that have adopted the waterborne technology,” said Rusnak. “It’s a way to become more sustainable but also it’s a great product for color-matching capability, and it’s easy to use.”

Jerry’s Body Shop originally opened a shop on Rock Street at what used to be an old carriage repair shop. Fifteen years later, they realized they had outgrown the downtown space and decided to relocate in 1987 to their current location at 1671 E. Madison Ave. in Mankato. At the time, that part of upper Mankato was composed of soybean fields. It was an unusual business move to relocate there at the time and build from the ground up, said Jerry Kottschade.

“When we moved up here, the word on the street was we wouldn’t make it six months,” Jerry Kottschade said. “They thought we’d go broke, too much money spent.”

View the embedded image gallery online at:
https://www.autobodynews.com/index.php/midwestern/item/17435-at-jerry-s-body-shop-in-mankato-mn-going-green-has-always-been-a-focus.html#sigProIdee19d18e52
More in this category: « Lincoln, NE, Auto Body Shop Planning 2nd Location Are You Unwittingly Driving A Salvaged Car? »
back to top