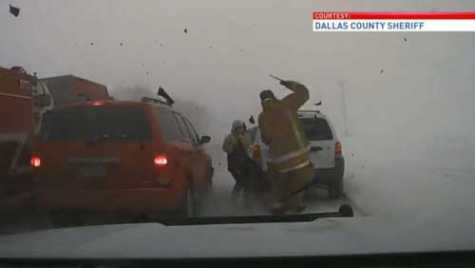 One after another, Iowa State Patrol and other law enforcement cars have been hit while trying to do their job.

Thankfully, he said he hasn't heard of any serious injuries, but there have been close calls.

A Dallas County Sheriff’s deputy suffered minor injuries after an SUV swerved into him as he aided another motorist. The car barely missed a firefighter and woman who was being helped on the road’s shoulder.

In Black Hawk County, no one was hurt after a car slid past one sheriff office car and rammed into another parked along the shoulder. It’s a part of the roadway law enforcement has to work on, but Trooper Conrad said he’s always aware of what could happen there.

"Absolutely, it's a very dangerous place to be on the roadway."

Dangerous and expensive. Patrol vehicles, such as the ones that have been hit in numerous incidents this winter, are specialized pieces of equipment.

"A lot of the electronics for those vehicles are in the trunk," said mechanic David Beer.

Beer owns 5 Seasons, one of the only auto body shops in the area approved to work on law enforcement vehicles.

"The emergency equipment in that car is probably about the same amount as buying the car," he said, pulling out a rack full of camera and radio equipment in the back of an ISP Dodge Charger.

That vehicle in his shop March 5 wasn't hit by another driver, but he said jobs like those are time-consuming and often mean a vehicle may be off the road for an extended period.

"It's a serious issue,” Beer said. “Any time you're dealing with emergency vehicles, you've got to keep them on the road."

"Now we're borrowing cars,” Trooper Conrad explained regarding a hypothetical situation in which a car is in the shop unexpectedly. “It can affect service, even, if we don't have enough vehicles up and running."

Trooper Conrad said it's not as simple as replacing a totaled car; that's less cost-effective for an agency, according to Beer. He said that by the time a new car is bought and outfitted with the specialized equipment necessary for law enforcement, it’s often more expensive than repairing a damaged vehicle.

We thank CBS2/Fox28 for reprint permission.