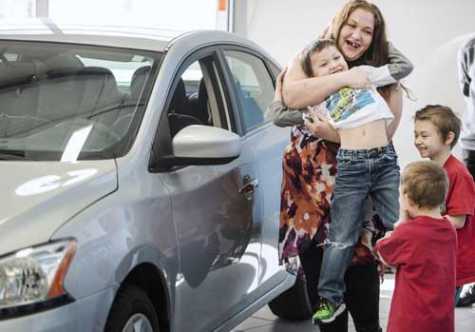 Katherine McClure holds on to her 6-year-old son, Carl-Michael, while her two other boys, Nathaniel and Aaron, look at the vehicle given to their family Feb. 8 at Gerber Collision in Janesville, WI. Angela Major

Katherine McClure has three of the most active boys you’re likely to ever see. She has been relying on the Janesville, WI, bus system to get around since 2015.

That will soon change.

On Feb. 8, the Janesville woman was presented with the keys to a 2013 Nissan Sentra free of charge.

Her son Carl-Michael, 6, got so excited that he climbed in through an open window and honked the horn. The other two boys, Aaron, 8, and Nathaniel, 4, were soon inside as well, vying to sit in the driver’s seat.

The boys had sat patiently before and during the ceremony, but it took several minutes for the adults to get them out of the car as their joy overflowed.

McClure still has to get the car inspected before she can put plates on it and drive into a better future. That’s because it was deemed a total loss by an insurance company.

But instead of being sold to a salvage dealer, the car got a new lease on life through the National Auto Body Council’s Recycled Rides program.

Gerber Collision & Glass, 2627 Morse St., Janesville, and Esurance were the main sponsors of the giveaway, but 26 sponsors contributed car parts or accompanying gifts, such as a free oil change, to make it happen.

McClure cried as the presentation began.

“I’m thrilled for her because I know how life-changing an automobile is when you do not have one and you need to get to the market and get to your job and get to school,” said Angela Moore, executive director of YWCA Rock County.

Affordable housing, child care and transportation are the three major needs of people dealing with poverty, Moore said. The McClures have the first two through the YWCA’s Transitional Housing Program, but transportation was missing.

Gerber Collision & Glass manager Brian Sullivan said the 19 Gerber shops in Wisconsin have made 15 similar presentations over the past seven years. This was the first in Janesville, where Gerber recently acquired the former Gates Collision Center.