At 80 Years Old, John Plowman Is Still in the Collision Game in Alpena, MI 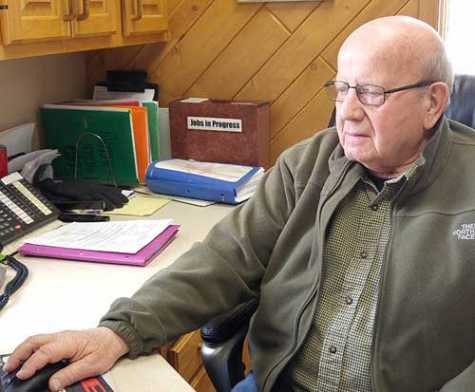 It’s no accident that John Plowman continues to work at Plowman’s Collision, the family-owned-and-operated business he founded in 1970.

John recently celebrated his 80th birthday and continues to work alongside his son, Steven, who currently owns the business, and his grandson, Brian.

John said he was always repairing something growing up and that he began doing auto body repair when he was 18. He worked at Chabot Collision and then at Washburn Ford before opening his own shop---then called John Plowman’s Collision---at the corner of Campbell Street and Washington Avenue. His wife, Bonnie, did the books.

John said the first 10 years of the business were pretty rough because they were just starting out, but that the most memorable part of his career has been watching his customer base grow. He said he started from nothing and it’s “remarkable” to see the number of jobs that go through the shop and the number of people who come to the business for repairs.

“If you do a good job, your reputation will speak for itself,” he said. “That’s the kind of reputation we carry.”

Steven said he grew up in the shop and started working for his dad through the high school co-op. Steven and his wife, Ruth, took over the business and moved it to its current location at 3146 U.S.-23 S. in 1989.

Steven said it’s very important to him that his dad be able to continue working at the business. John is well-respected in the industry, Steven said, and he knows the ins and outs of the business.

Brian said he grew up around the shop and describes working alongside his father and grandfather as “just another day for us, anymore.”

“I get to see him every day, versus people who don’t see their grandparents every day,” he said, adding that his grandfather continues to work at the business because he enjoys being there.

John said he’s happy to see his grandson “stepping up to the plate.”

Customers who frequent the business will find John working in the office, where he still writes estimates and orders the parts needed to complete the repairs. He is currently working half-days at the business five days a week.

John said turning 80 doesn’t really bother him much and that it probably bothered him more when he turned 60.

“I’m thankful that I can get up and out and do something,” he said, noting that you can’t do much about age.

Despite his age, John said he has no plans to retire any time soon.

“I’m going to work a half-day until they kick me out,” he said.

We thank The Alpena News for reprint permission.

View the embedded image gallery online at:
https://www.autobodynews.com/index.php/midwestern/item/17073-at-80-years-old-john-plowman-is-still-in-the-collision-game-in-alpena-mi.html#sigProId7e8b4f22db
More in this category: « CARSTAR Expands Into Piqua, OH Progress, But No Auto Insurance Reform Ideas Committed to MI Senate Bill »
back to top