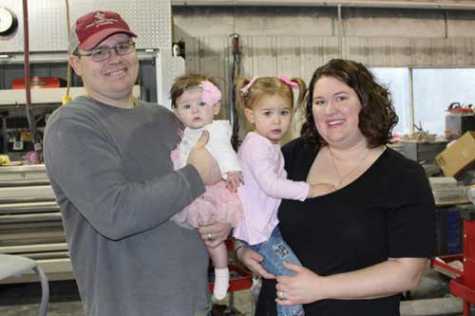 Matt Wellman is the new owner of Marquis Body Shop in David City, NE. Pictured here are his two daughters, Abigail and JoiseMae, and his wife, Sarah. Eric Schucht, The Banner-Press

For the past year, he’s worked in town at Storm Aeronautics, but said he has always dreamed of having a business of his own. While Wellman has operated a small repair shop out of his property near town, the location was not ideal, he explained.

“Nobody wants to bring their car out to the country, so being right along the highway is a good property, and it’s a good location,” Wellman said. “I’ve always wanted to do this line of work. I’ve done quite a bit in the past, and [being] in town is key to a small business like this.”

Wellman seized the opportunity when he heard the previous owner, Michael Novotny, was retiring. Now, after more than 16 years, the shop has been handed off to the next generation.

The shop specializes in collision repair, such as fixing dents and performing paint work on vehicles. The new owner said he has a five-year plan for the business. The first step will be updating the current facility. Internet will be added to the building to incorporate more electronic tools. An email address for the business has been created along with a Facebook page.

A software program and computer will now be used to create project estimates instead of by hand. A computerized system mixing scale and camera will also be utilized to create the perfect paint shade for each vehicle worked on.

“I want to bring a modern-day body shop to David City. And I don’t mean that in disrespect to the previous owner, because not everybody is good with computers, and the technology doesn't get along with everybody,” Wellman said. “We’re going from no technology in this shop to 2019 technology.”

Wellman earned his associate degree in auto collision repair technology from Southeast Community College. He said he has always enjoyed this kind of work, adding that one of his early inspirations was Eldon's Body & Paint in David City.