Cause of Auto Body Shop Fire in Bemidji, MN, Still Being Investigated 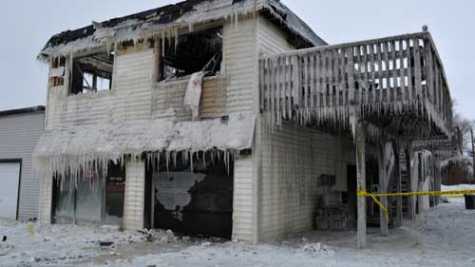 Now covered with icicles, Class A Auto Body in Bemidji, MN, was the site of a large structure fire the evening of Jan. 19. In addition to the auto body shop, the building included two apartment units. Jordan Shearer, Bemidji Pioneer

Engulfed in flames just two days before, the shell of the Class A Auto Body building was covered in ice Jan. 21 as officials continued to investigate the cause of the structure fire that broke out the afternoon of Jan. 19.

Located at the intersection of Central Avenue Southeast and Second Street, the fire began about 4 p.m. From that point on, it became an all-hands-on-deck situation well into the night for the Bemidji, MN, Fire Department.

"We put every single one of our available firefighters on the scene," Bemidji Fire Chief Dave Hoefer said.

Firefighters from Cass Lake, Blackduck and Solway also came to Bemidji's downtown station in case any additional help was needed.

Although the building's still standing, it was damaged beyond repair and will need to be demolished, Hoefer said. However, there wasn't any damage to any of the surrounding buildings.

"We were probably four hours in before I'd say we really had the upper hand on it," Hoefer said.

As of Jan. 21, Hoefer said they still did not know the cause of the fire or exactly where it began in the building.

The scene was mostly quiet the morning of Jan. 21 after the flurry of activity over the weekend. The building was charred, with sections of the upper walls and roof no longer there. Yellow caution tape sectioned off portions of the surrounding ground. Periodically, a vehicle would pass by slowly, the driver eyeing the destroyed building.

Class A Auto Body owner Gary Tobey was at Hockey Day Minnesota---taking place just blocks away---when he realized there was a fire at his shop. He's owned the building since the early 1990s but said he isn't sure what his plans are moving forward in the immediate aftermath of the fire.

In addition to the auto body shop in the lower level, there were two apartment units in the building, one of which was vacant.

No one was in the building at the time of the fire, but passerby Adam Hanson didn't take any chances. After noticing the fire in the building, he went up to the upper floor of the building and broke in, searching to make sure that everyone was out. He cut his hand in the process.

"This doesn't happen very often," Cory Nelson, the father of one of the three tenants, told the Pioneer on Jan. 21. "And when somebody does that for perfect strangers---yeah, that's pretty amazing."

We thank The Bemidji Pioneer for reprint permission.

Read 991 times
More in this category: « Cause of Sundance Chevrolet Fire Under Investigation in Grand Ledge, MI CARSTAR Voted a 2019 Best of Omaha, NE, Winner »
back to top