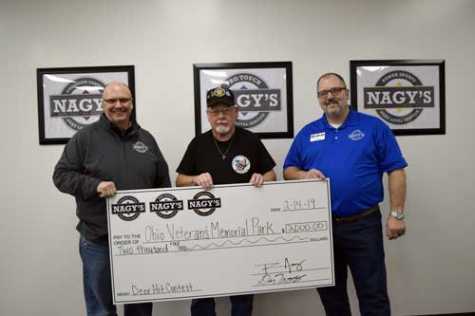 During the fall and winter months, Nagy’s Collision Centers runs its annual “Hit a Buck, Donate Some Doe” campaign to benefit local charities.

Last year, 213 vehicles impacted by deer hits were brought to Nagy’s for repairs---an increase from 171 hits the year prior.

For every vehicle that was involved in a deer accident and repaired at one of Nagy’s Collision Centers’ 11 locations from Oct. 1—Dec. 28, 2018, Nagy’s had the drivers cast their vote for one of three charities.

“Each year, the months of October through December have the highest vehicle accident rates involving deer,” said Nagy’s Collision Centers President Ron Nagy. “Our goal at Nagy’s is to turn these unfortunate incidents into something positive while giving back to the local communities we are in.”

View the embedded image gallery online at:
https://www.autobodynews.com/index.php/midwestern/item/17019-nagy-s-collision-s-hit-a-buck-donate-some-doe-sees-increase-from-previous-campaign-in-oh.html#sigProIdbca9e003ee
More in this category: « Missouri Anti-Safety Inspection Bill Reintroduced Cause of Sundance Chevrolet Fire Under Investigation in Grand Ledge, MI »
back to top