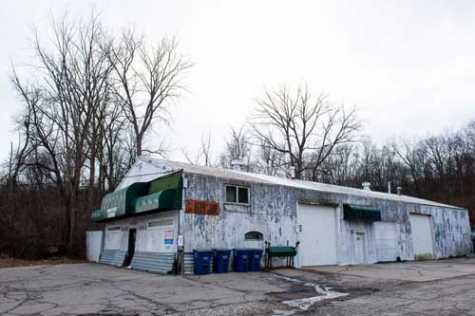 We thank MLive for reprint permission.

After two decades in business at 1251 N. Main St., Hawkins Auto Body may close, giving way to a budding industry.

Plans are in the works to transform the Ann Arbor, MI, auto body repair shop into a medical marijuana dispensary with a sleek new look.

“They’re hostile taking me over, running me out of here,” said owner Jeff Hawkins, who isn’t happy about it.

Hawkins has been in business for 34 years and located at the North Main location for about the last 20, he said.

He mostly restores old classic cars but also helps out the occasional college student or old lady who needs a quick repair, he said.

Hawkins isn’t sure where he’ll go from here, but he doesn’t expect to find another spot in Ann Arbor.

“They’re just buying everybody out,” Hawkins said of the growing number of marijuana dispensaries in Ann Arbor.

Hawkins’ landlord will give him 90 days to get out once the deal goes through, he said.

The twist: His landlord is his father, who gave in when a medical marijuana business started “flashing big money,” he said.

The company’s plans hit a snag at the Ann Arbor Planning Commission meeting the night of Tuesday, Jan. 15, as it failed to secure enough votes due to concerns about the driveway configuration.

Commissioners suggested changes to be discussed by city planners and traffic engineers.

“We’ll modify it any way they want,” said Harry Hawkins, who acknowledged that he intends to boot his son from the property to make way for the marijuana dispensary.

A real estate investor and owner of West Hawk Industries in Ann Arbor, Harry Hawkins said his son’s body shop isn’t doing well enough to pay the property taxes, which he pays, and he thinks his son can find a new place in perhaps Milan, Dexter or Chelsea.

“I’d like to just clean up that area and make it look nice for the entrance to Ann Arbor,” he said, indicating the dispensary plans to invest about $200,000 in fixing it up.

The commission voted 5-4 in support of the dispensary the night of Jan. 15, but it needs six votes to pass.