SkillsUSA Winner in Collision Repair Category Is Recognized With Signs in Donovan, IL 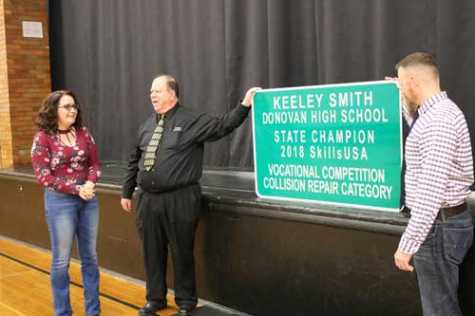 Recognition of one girl’s academic success can be seen by those entering Donovan, IL.

Last April, Keeley Smith earned gold in the 2018 SkillsUSA competition. She’s the state champion in the vocational competition’s collision repair category. There’s a green sign at both the north and south entrance of the town along Route 52.

Smith, 18, was honored with a small surprise presentation at her alma mater the morning of Dec. 27, 2018. Her family and friends were there to support her when Donovan District 3 Superintendent Steve Westrick, Kankakee Area Career Center Director Matt Kelley and her former collision repair instructor Chris Moore showed her the sign.

At the competition, she couldn’t believe her name was called as the first-place winner.

“I couldn’t stop shaking,” she said.

She went on to the national competition and didn’t fare as well.

“There are some really talented people there. There’s still a lot I need to learn,” she said.

Westrick said this is something deserving of recognition. Such signs are usually devoted to successes on a sports field.

“Kids are going to have more success in life outside of sports. This young lady is an example of hard work and dedication, with a supportive family,” Westrick said. “We want our kids to have all the opportunities they can have. She’ll have these skills for the rest of her life.”

In Moore’s 13 years of teaching, he said he’s taught more than 20 girls in the classes. Smith does stand out.

He noted Smith has a great amount of support from her family, which has lent itself to her success.

With this competition, he said, “She really put in a lot of work. And she always follows through.”

“She’s a stand-out student who’s always willing to help. She shows up and gets the job done,” said Kelley. At the career center, she met the criteria to earn a place in the National Technical Honor Society.

She would love to see more girls be part of technical classes and go into such a career.

“It’s good to see there are girls around,” Smith said.

There were a few girls at the state competition, but she was the only one---of eight competitors---in her category. At the technical institute, she’s one of six girls in the 40-person program.

At her school, she’s liked that she can help show that girls---women---have just as much an impact on the trades as boys do.

“You have to prove yourself---you’re just as good as a guy,” she said. She added that instructors at the college level often know that girls will outshine their male counterparts.

Westrick said that with the education she’s receiving, she’ll be 20 years old and earning $50,000 a year, and, again, she’ll have skills that she’ll carry with her throughout her life.

Kelley noted, “Work is the same as a competition.”

Smith is proud to take the road she’s chosen through life. She said there’s too much of a push for high school students to go on to a four-year university. She hopes there’s more of a push to get kids into tech classes.

There are a lot of people who are better with their hands than they are with a book, she said, and Kelley agrees with that. She said it just takes a drive to do it well.

It all starts with high school and receiving the encouragement there.

Her interest in such work came from growing up on a farm, which involved a lot of work needing to be done on tractors.

“I realized I’m good with my hands,” she said.

“It’s what I knew the least about and what I could learn the most from,” she said.

When she visited the career center her sophomore year, she decided to take the two-year collision repair program.

Smith, the daughter of Andrew and Joyce Smith of Martinton, is currently attending Ohio Technical College in Cleveland. She is in the third module of a 12-month program she started in October. She’s working as a detailer at a dealership as well.

She will be in a program learning more about BMWs. She said that to be part of this program, students have to be at the top of their game.

Her goal is to one day have her own shop.