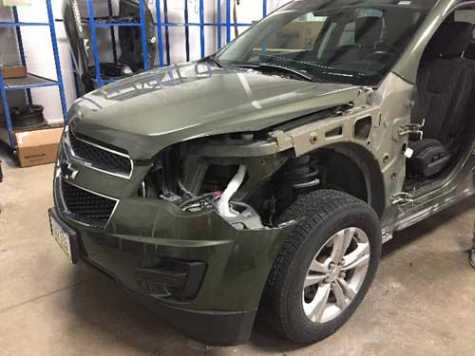 We all spot deer on the roads and highways. A Tama County, IA, woman's death shows just how dangerous crashing into a deer can be.

A crash occurred in late December 2018 on U.S. Highway 30 at Q Avenue in Tama County, east of Tama. Iowa State Patrol said the deer went through a woman's SUV, hitting and killing the passenger, 57-year-old Donna Smith. Fatal deer accidents are not that common. There are more than 1 million deer crashes per year, but only about 200 are fatal.

Most crashes leave extensive damage to the front of the vehicle. For example, a Chevy Equinox at Bob Mickey Collision Center had to have the driver's side headlight, fender and door replaced after it hit a deer.

Workers have been busy painting and sanding the parts. It can take about a week to finish the repairs. Workers said there are more deer out in the roads this time of the year than usual.

"The farmers couldn't get in there because there was so much rain this fall, so that kind of pushed everything back because once they go into the fields, it pushes the deer out,” said Trent Thompson, operations manager for Bob Mickey Collision Center. “Once the deer start running, that's when we really start to see them.”

Thompson said vehicles are being created with more safety features than ever. That's why the car usually wins when it takes on a deer.

"They've made them lighter,” he said. “Basically, a lot of the time they're using different metals. So we're using lighter metals that are much stronger. So the technology that's going into not only the outer structure, but inner structure, is much stronger and safer."

We thank KCRG-TV9 for reprint permission.