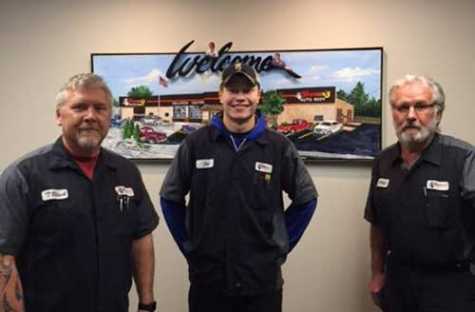 A Sheboygan, WI, business is celebrating its 50th anniversary this year: Dean's Auto Body, Inc., opened in 1968 in Sheboygan.

Phil and Nancy Black opened the shop at 1407 N. 29th Street. In 2013, their son Tracy bought the business, keeping it in the family.

But the Blacks had been working in the industry since long before the business opened. Phil used to work with his two uncles growing up. His uncles managed multiple auto body shops, and he learned the tricks of the trade from them.

But he always had dreams of owning and operating his own shop.

Phil worked with his uncles until he went away to the military. In 1968, he bought one of the auto body shops his uncles managed and, with the help of Nancy, created the Sheboygan staple.

Phil wrote estimates and worked on repairing the vehicles while Nancy ran the office, greeted customers and paid the bills.

Tracy followed in their footsteps. Having helped out at Dean's since he was old enough to push a broom, he spent countless weekends and summers learning the trade. In 2009, Tracy's wife, Sue, took over for Nancy when she retired. In 2013, Tracy and Sue bought the business and have been running it ever since.

Tracy and Sue have a son, Joe. He did an apprenticeship program during his junior and senior years in high school. After graduating in 2018, he joined the family business full-time as a painter.

Joe's wish is to be the third-generation owner of Dean's.

"Because the business was built on integrity and trust, we have been blessed with a good reputation, numerous referrals and repeat customers," Sue said in a press release.

Dean's and the Black family have worked with local high schools and Lakeshore Technical College to help anyone who wants to go into auto repair careers.

"We have performed mock interviews and given tours of our shop to first-year students, and we hire second-year students for paid internships," Sue said. "The high school and technical students are the key to our future."

And Sue expects the future to be bright.

"We know there will be challenges with all the changes that continue to take place in our industry, but we will always be ready to hone our craft and continue to grow as a company. As John C. Maxwell once said, 'Change is inevitable; growth is optional.' May the road be long before us!" Sue said.