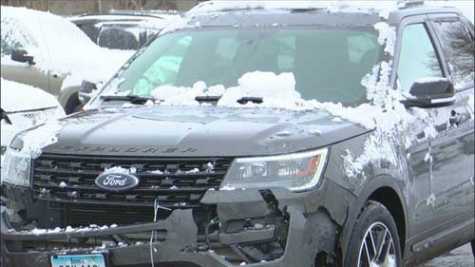 Davenport, IA-area body shops were hard at work Nov. 26 after the first massive winter storm swept through the Quad Cities.

"With the winter weather come a lot of people slipping and sliding around, so we see a lot of suspension damage."

The slick roads left auto body shops with many cars to repair from people getting into accidents.

"We're seeing a lot of those types of accidents where people are hitting each other because they're trying to go too fast trying to get to places."

This is something Arnold's Body Shop Vice President Joe Arnold said they were pretty prepared for.

However, although crews were working around the clock to clear paths for drivers, it still put some, such as Tony Carter, in dangerous situations.

"The damage is to the front end of the car, which is all plastic. That's why there is a lot of damage, but it did absorb the impact really well," Carter said.

This left Carter with advice for other people who plan to hit the roads.

"Please be careful," he said. "With what we had with the rain last night, then it turning into snow, it is all freezing as we speak. The temperature’s dropping. I hit black ice, had plenty of time and should've stopped a half a mile before, so be careful."

We thank OurQuadCities.com for reprint permission.