Car vs. Deer Collisions Cause Costly Repairs in Cambridge, OH 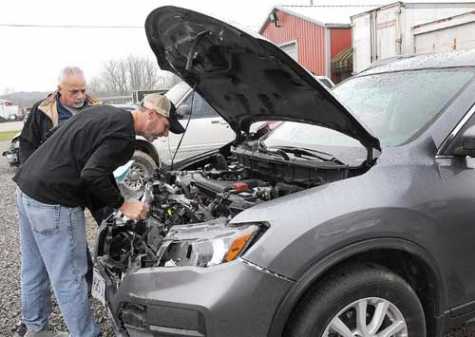 Travis Morgan, right, of B&B Body Shop and Towing, and Frank Bruno, vehicle appraiser for FrontLine Appraisals, check out the heavy damage to the front of this SUV after the driver hit a deer on Interstate 70 the weekend of Nov. 10--11.

It happens in the blink of an eye. A deer appears out of virtually nowhere and “boom”: You’ve just collided with an animal weighing in at more than 200 pounds.

This scenario is being played out all over the area of Cambridge, OH, this time of year as deer “are on the move.”

Motorists are hitting dear at an alarming rate this season, according to Frank Bruno, senior appraiser for FrontLine Appraisals. He said he’s had five deer-vehicle collisions to investigate in less than a week.

“It’s been years since I’ve seen so many dead deer along the sides of the roads,” he said.

Bruno travels around this section of Ohio filing accident claims. He was at B&B Body Shop and Towing Nov. 13 looking at an SUV that was involved in a deer collision over the weekend of Nov. 10--11.

“I saw a truck that collided with a deer on the way here,” he added.

Travis Morgan, an owner of B&B, said most deer repairs are around $6,500, while the one to the SUV mentioned will be much more than that if it is not a total loss.

“We have them come in with just bumper damage. Others are much more severe and can be a total loss. The worst thing is the new technology---that’s driving the repair costs up,” Morgan said.

Morgan added that so far this year, they have had more than 30 vehicles from deer accidents to repair.

At Ron Guthrie State Farm Insurance, Jill Black said the agency is filing claims for about two or three deer-related accidents per week.

“They’re (deer) going crazy right now. We give out deer whistles that are supposed to keep deer away from vehicles. People tell us they work,” Black said.

Ohio has seen a rise in deer-related crashes over the past couple of years. The increased crash risk is partly due to the fact that October through December is peak deer-mating season in the Buckeye state. Most crashes occur between dusk and dawn and between the hours of 6 and 9 p.m.

We thank The Daily Jeffersonian for reprint permission.

Read 1090 times
More in this category: « How Collision Avoidance Systems Play a Part in Deer Crashes Women in Automotive and Collision Expresses Gratitude to Sponsors in IL »
back to top