How Collision Avoidance Systems Play a Part in Deer Crashes 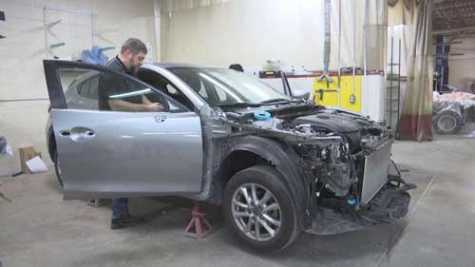 A car gets worked on at Williams Auto Body in Ashwaubenon, WI, after hitting a deer.

"During the beginning of the week on Mondays and Tuesdays, we're getting two to three cars in a day, it seems," said Mark Williams, owner of Williams Auto Body in Ashwaubenon, WI.

Body repair shops in the Green Bay area said they see an increased number of car-deer collisions this time of year.

From the summer of 2017 to 2018, Wisconsin was ranked fourth-highest in the country for car-deer collisions, according to a new State Farm Insurance study.

With it now being breeding and hunting season, deer are constantly on the move.

It brings up the question, could newer technology in cars, like collision avoidance systems, prevent drivers from hitting a deer?

A collision avoidance system allows a car to deploy autonomous braking to prevent a crash. Simply put, it hits the brakes if you don't.

"Most cars use radars, some use lasers, [and] some cars are even employing cameras too---forward-looking cameras to detect what the object is in front of it," said Ben Hendricks, an automotive technology instructor at Northeast Wisconsin Technical College.

The system takes into consideration the speeds at which you and the person in front of you are going in order to detect whether a crash will happen.

"It would first warn the driver, and then if the crash were still imminent at that point, it could employ autonomous braking," said Hendricks.

Hendricks said cars with a collision avoidance system won't necessarily stop due to a deer darting in front of it, but if the deer were standing still and speeds were low, both the deer and the car could be spared.

"In addition to the radar, some can also use forward-looking cameras to detect objects, so I guess if a deer were standing still, it could recognize that there is a deer and employ that warning and/or the autonomous braking," added Hendricks.

Hendricks expects crash avoidance systems to become a required safety feature in a few years but said they can't be fully relied on to avoid deer crashes just yet.

“Because of how unpredictable a deer can be, I don't think that they're designed to avoid them because that means the car has to be looking off to the side, too," said Hendricks.

Experts say deer crash repair costs are higher with newer cars because camera, laser and sensor technologies are built into the bumpers, mirrors and windshields. Damage needs to be identified through a scan before shops can do any repair.

"The computers control just about everything on cars these days, and until we do that scan, we won't know. That [right] there just increases the cost already, just by having to do that scan," Williams added.

Williams said a deer crash is usually covered by comprehensive insurance. Experts say that if you don't have any other choices, it's always better to hit the deer than to swerve.

We thank WBAY-TV for reprint permission.