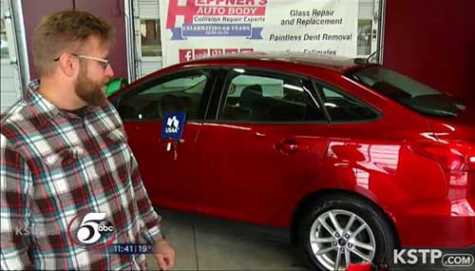 Americans across the country recently paid tribute to the men and women who served our nation's military in honor of Veterans Day.

One veteran in Wisconsin received a big thank you for his service.

Heppner's Auto Body in Hudson, WI, put 100 hours of work into fixing up a car for Eric Grant, who served more than a decade in the Army.

It was made possible through the National Auto Body Council’s Recycled Rides program, which coordinates the refurbishing of used vehicles for veterans in an effort to help ease the burden of returning to civilian life.

Grant was deployed to Iraq and Kosovo and is now working for a lawn care company. He said his old car was on its last leg, and he plans to use his new set of wheels to get to and from work.

He said he was so touched by the generosity of the community that gave him this incredible gift.

"It's amazing. My heart is overwhelmed," Grant said after seeing the car for the first time. "I can't believe this. It's like I'm in a dream right now waiting to be awakened."

The 2016 Ford Focus that he received had been involved in a prior crash and was donated to Recycled Rides.

Many local businesses worked together to fix up the car by donating parts, money and time.

"Here at Heppner's, we have people who have served or family who have served, so to be able to do this today is really special," said Laura Robertson, vice president of Heppner's Auto Body.

This is the third time the body shop has donated a car to a local veteran.