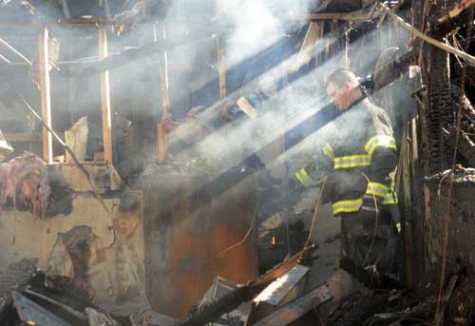 A raging fire destroyed a long-time auto body shop on Route 46 just north of the Route 307 intersection the evening of Nov. 10 in Jefferson, OH.

He said 27 firefighters were involved in fighting the fire. The fire did not result in any injuries.

Reports of the fire began around 11:16 p.m. Nov. 10. When firefighters arrived, they found the structure fully involved in flames, said Lachey.

The cause of the fire is under investigation by two investigators from the Jefferson Fire Department, the chief of the Ashtabula Township Fire Department and the State Fire Marshal’s Office, Lachey said.

“Undetermined and under investigation,” said SFMO Investigator Jeff Koehn. “The insurance company will be bringing in electrical investigators.”

Lachey said firefighters were on the scene until 3:40 a.m. and went back to the station to prepare the trucks for operation. They completed that task around 6 a.m. and were called out for a rekindle about 6:15 a.m.

Firefighters were on the scene most of the morning and into early afternoon, combing through the twisted remains of the structure.

Lachey said the business is insured, but the operation was a total loss. He said several vehicles inside the building were destroyed as well.

Many vehicles were lined up outside the building. Most didn’t appear to be damaged by the fire but provided a challenge for firefighters battling the blaze.

The investigators were busy reviewing the damage, and firefighters were still dealing with “hot spots” around 11:30 a.m. on Nov. 11.