Every Day, a Car Hits a Deer in WI; 2nd Week of Nov. Among Most Dangerous on WI Roads 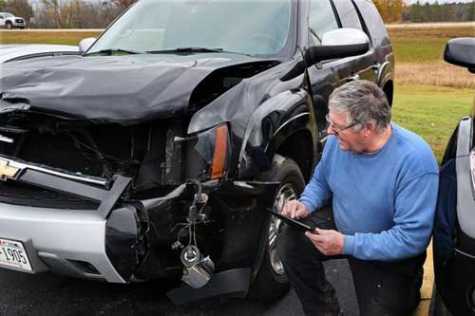 Todd Gillette, owner of Gillette’s Collision Center in Waukesha, works on a repair estimate for a 2008 Chevy Tahoe. The SUV recently collided with a a white-tailed buck deer. The SUV's owner, Ryan Hunkins of Mukwonago, said his wife was driving when the buck jumped over a median barrier on I-43 and was struck by the SUV in midair. Michael Sears, Milwaukee Journal Sentinel

The week of Nov. 8 was among the most dangerous times of the year for folks traveling Wisconsin's roads and highways as white-tailed deer, consumed with their annual mating season, increasingly ran into traffic.

In 2017, Nov. 8 was the peak day for vehicle vs. deer crashes, with 213 across the state, according to a Milwaukee Journal Sentinel analysis of Wisconsin Department of Transportation data. The year before, the peak was Nov. 10.

While the number of crashes peaks during that time of year, no day is safe: For the second straight year, not a single day passed in 2017 without a motorist striking a deer somewhere in Wisconsin, the DOT data shows.

From the forested north to the densely populated south and from Lake Michigan in the east to the Mississippi River in the west, 19,899 vehicles crashed into deer on Wisconsin roads and highways last year. During the past five years, the number of deer crashes in Wisconsin has remained fairly steady between 18,300 and 20,400, according to state DOT numbers.

Most of the deer crashes involve damage to vehicles, but some have resulted in people dying or being injured.

In 2017, nine people were killed and 604 were injured in crashes with deer.

Beyond the human toll, the crashes are taking an increasing financial toll.

Cars are increasingly likely to have safety technology that helps reduce death or injury for humans. But all that technology also makes repairing deer collisions more complicated and costly.