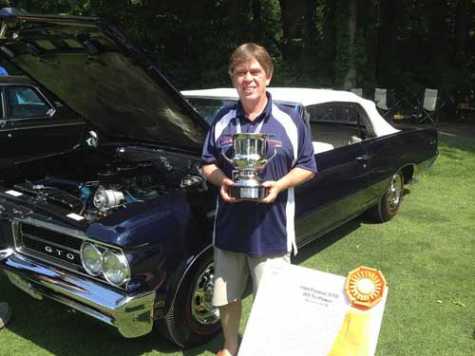 Steve Whittaker, along with his Grand Award-winning 1964 Pontiac GTO 389 Tri-Power, at the Concours d’Elegance in 2017 in Plymouth.

The village of Walloon Lake, MI, has seen numerous changes and improvements over the past several years.

One company has now received several national recognitions for its work.

Steve Whittaker, owner of Lake Area Collision, located at the intersection of US 131 and M-75 , spent more than two years on the initial restoration of a 1964 Pontiac GTO 389 Tri-Power, the first year GTOs were produced.

The car originally received a Gold Class rating when it was first judged in 2011. This classification is reserved for the very few vehicles that are successfully restored to their original factory specifications and conditions exclusively with parts and equipment of that year.

Since then, Whittaker and his staff at Lake Area Collision have torn down and rebuilt the Nocturne Blue convertible several more times to correct parts of the car that were not 1964 vintage.

These efforts paid off in 2016 when the car was recognized as the Grand Champion at the 2016 GTO Association of America National Convention in Seattle, Washington and the Top of Class award at the 2016 Muscle Car and Corvette Nationals in Chicago.

In 2017, Whittaker was invited to display his car at the exclusive Concours d’Elegance in Plymouth. This show is by invitation only and is reserved for only the top cars in all classes and vintages of automobiles.

The car received the ultimate recognition at this event: the Grand Award for “Most Significant General Motors” vehicle at the show. This year, the vehicle was awarded the “Best of Show” at the R.E. Olds Museum Car Capital Auto & Bike Show in Lansing.

The name GTO is the abbreviation of the Italian term “Gran Turismo Omologato,” which means a general production automobile that also qualifies for racing competitions.

One of only 5,000 convertibles made that year, Whittaker’s car was only used for five years before it was relegated to a salvage yard. He purchased the GTO in 1995 for $100 primarily because his 10-year-old son thought convertibles were cool.