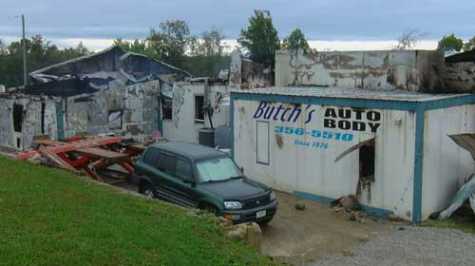 Butch’s Auto Body in northern Kentucky was destroyed a second time after an overnight fire. WKRC

A northern Kentucky auto body shop went up in flames late the night of Oct. 10.

It is the second time the family-run business has been destroyed. The first was in a tornado more than six years ago.

Everyone in the Piner, KY, area remembers what it was like when an EF-4 tornado ripped through on March 2, 2012.

"We lost everything on the farm. So he just rebuilt at the end of 2012 and reopened---and now this," said Amber Hamm, the daughter-in-law of the owner of Butch’s Auto Body.

The family opened the shop more than 45 years ago. It took several months, but the family rebuilt. Just when they were finally putting the tornado in the rearview mirror, devastation struck again.

Hamm saw flames coming from the shop late that Wednesday night. She got the family and pets to safety and then called 911.

"It was devastating. We knew the flames were just shooting out everywhere and there was nothing we could do to stop it," Hamm said. "My husband went in and started pulling customers' vehicles out of the burning building so he could at least save those, and that was pretty scary because soon after that, the roof collapsed in."

The building and just about everything inside was a complete loss, including tools that had been in the family for generations.

The family is raising money to help get back on their feet.

We thank WKRC for reprint permission.

View the embedded image gallery online at:
https://www.autobodynews.com/index.php/midwestern/item/16500-ky-family-run-auto-body-shop-destroyed-a-2nd-time-after-overnight-fire.html#sigProIdb4ab9d167d
More in this category: « Gerber Collision & Glass Opens Repair Locations in Brownsburg and Greenwood, IN ASE to Hold Conference Leading to Assessing Technician Competency »
back to top