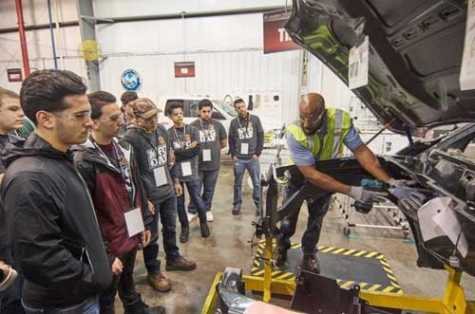 They are doers who like to work with their hands.

Macomb County's annual Manufacturing Day is made for students like them who may not be interested in a post-secondary four-year degree but would excel in industrial or skilled trades careers.

Students from Stevenson High School in the Utica Community Schools District and those from the Warren Career Prep Center, part of the Warren Consolidated Schools, participated in the fifth annual Manufacturing Day at the FCA US Warren Truck Assembly Plan in Warren on Oct. 5. The program is part of a national campaign designed to create awareness about the economic importance of industry and the interesting, well-paying jobs it provides. Since 2014, more than 7,000 students have participated in Macomb County's program. This year, 82 tours were given by 72 host companies to 2,400 students from 28 Macomb Intermediate School District schools. It is the largest Manufacturing Day yet in the county.

"I didn’t really know what to expect, but there are lots of robots and machines, more than you would think there would be, and there’s a lot more jobs, and it’s a lot bigger than you would expect," Pate said.

Both teens are interested in auto collision repair---body repair for Bishabo and structure and frame repair and welding for Pate. Both envision a career in the trades. Bishabo said he prefers to find work sooner than the time and cost that a four-year degree would require. Pate is still considering a four-year university, but said he probably will pursue a different direction.

"Most kids think they have to go to college to make a good living. [For] a lot of kids, college is not for them, but everyone tells them they have to go to college," Pate said. "And a lot of times, they end up not doing well and dropping out because it’s not for them. They don’t realize all the jobs that they can get without going to college and make a living for themselves with jobs that they might be interested in.

"I’ve thought about getting a four-year degree, but my issue is, school has never been my thing. Sitting down in a classroom is not really my thing because I have really bad ADHD (Attention Deficit Hyperactivity Disorder), so it’s even harder with that. Doing is my strong suit. When I’m reading, it sort of bores me, but when I’m working with my hands, I’m more interested in it and engaged in it, so it’s easier for me to retain the information."

Students were given a tour of the 80-year-old assembly line facility that currently builds the Ram 1500 Classic and participated in some hands-on job readiness activities. Among the activities were dexterity tests and assembly mock-up, where students learned the importance of performing every part of the assembly process correctly and how even small mistakes could result in death for those inside the vehicle.

Jim Battaglia, an instructor at the career prep center, said exposure to the opportunities is the value of Manufacturing Day.

"Typically, they come away more impressed than when they walked in," he said. "Even living in this area, most students would say they didn't even know what was here before we came here today. There are so many career opportunities right here in Michigan."

Macomb County Executive Mark Hackel said Manufacturing Day has become a success in the county for a variety of reasons. The program helped bring high school seniors into industrial plants to see the kind of opportunities that are available and the shortage of workers. School districts have brought back the types of classes that promote skilled trades, and in turn companies have assisted the schools, knowing that they may be helping train future employees.

"Manufacturing Day is important for the kids and the companies because this is where it first came from with the manufacturing companies. We got a chance to talk to manufacturers, and they were really concerned about the workforce and finding and recruiting talent," Hackel said. "We partnered with the MISD and the superintendents to find out where the disconnection is and how can we reconnect, and Manufacturing Day became the catalyst.

"These are highly technical jobs, they’re cleaner and [they’re] in safer environments. Today, we’re seeing every school district in Macomb County is participating. We have 72 companies participating and some had to be turned away."