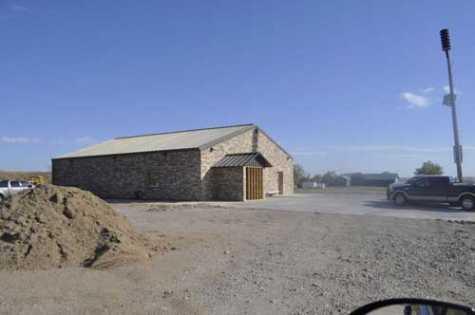 The Pierre City Commission gave preliminary approval in early October to a condition-use permit to Gerrick McComsey to use this building for a new auto body shop in the 700 block and east side of Garfield Avenue, the truck route. Stephen Lee, Capital Journal

Pierre, SD, city officials have given a preliminary OK to Gerrick McComsey’s plan to put an auto body repair shop in his building at 720 N. Garfield Avenue.

McComsey owns 9.5 acres on the east side of Garfield in the 700 block, between Calvary United Pentecostal Church and Slumberland, City Planner Sharon Pruess told the city commission on Oct. 2.

McComsey owns CAM Rentals LLC and is an owner of Sharpe Enterprises, one of the area’s largest construction firms.

Pruess said the city planning commission studied the plan in September, held a public hearing to which no member of the public came and sent its recommendation to the city commission.

The city commission on Oct. 2 approved the idea as far as setting a public hearing for it at 5:45 p.m., Oct. 16, where final approval is slated to happen.

Pruess said McComsey had contacted the nine owners of adjacent properties and they all signed a “I have no objection to the proposed” use of the property.

The area is zoned “local business,” but an auto body shop requires a conditional-use permit.

Commissioner Blake Barringer said that because of the paint and other aspects of a body shop’s work, some neighboring property owners might have concerns, but he said it appears they have been informed and are fine with it.

Pruess said McComsey has promised to build a 5-foot fence around the body shop property and pave the parking lot and add green space within 12 months of getting the use permit.

On Oct. 3, men were working inside the building, getting it ready.

It sits in one corner of a 9.5-acre parcel. McComsey has used it for his rental business.

McComsey has longer-term plans to plat the rest of the 9.5 acres and subdivide it, which will require adding some roadways and more access to the parcel and testing the ground, Pruess said.

Commissioner Jamie Huizenga said he appreciated all the work that McComsey has done and is planning to do.