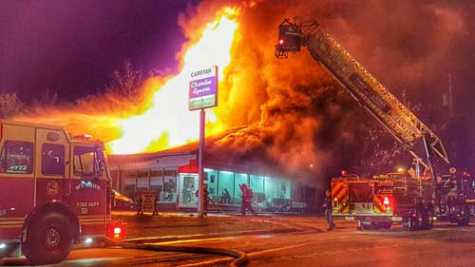 A Chardon, OH, auto body repair shop burst into flames Sept. 27, destroying the back building and collapsing the roof, according to the Chardon Fire Department.

Chardon Fire Chief Larry Gaspar said firefighters tried to get inside initially but were quickly pulled out because of the intensity of the blaze. It’s what firefighters call a “defensive fire,” Gaspar said.

“It’s very stubborn,” he said the night of the fire. “We’re having a hard time getting the water in that area to completely extinguish the fire.”

“The fire burned the length of the building, causing the roof to collapse,” a news release elaborated. “Certain sections of the building had a pitched roof built over a flat roof, which made firefighting difficult due to the fire being sandwiched in between the two roofs.”

Nobody was in the building at the time of the fire, and no injuries occurred.

This being a two-alarm fire, Chardon Fire Department received mutual aid from 13 other fire departments.

The cause of the fire is still under investigation by the Geauga County Fire Investigation Unit and State Fire Marshal’s Office, remaining undetermined.