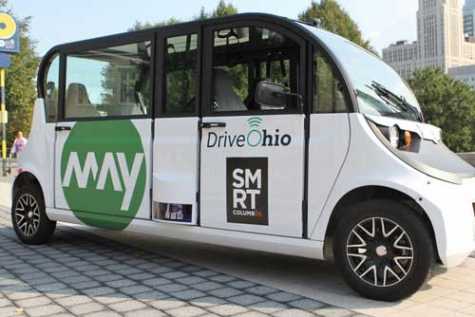 Smart Columbus, which is working to innovate transportation in the city, unveiled the driverless shuttles at an event Sept. 19. Adora Namigadde, WOSU

The green and white self-driving shuttle unveiled by Smart Columbus on Sept. 19 looks something like a small, rectangular minivan. A lot of windows and the logos of partner organizations decorate its sides---Smart Columbus, DriveOhio, May Mobility.

The interior reveals six seats: four in the back that face each other and two in the front---one for a passenger and one for a fleet attendant who will be able to assume control of the vehicle. It's a shuttle that key players hope to see more of throughout the state.

That three-mile route is not currently served by COTA buses.

According to Smart Columbus Director Jordan Davis, the self-driving shuttle system is the first of a three-phased series of pilots to be introduced in the city.

How do they work?

May Mobility, an Ann Arbor start-up, will supply the shuttles to Columbus. The company runs a similar shuttle service in Detroit, which just carried its 10,000th rider.

CEO Edwin Olson said 21 different sensors look out onto the roads from the bus.

“If we stand in front of the vehicle, you’re going to be visible to about five or six different sensors all at the same time," Olson said. "Many of those are LiDAR. So LiDAR is shooting out little pulses of light and basically timing how long it takes for the light to go out and come back.”

All the sensor data returns to a computer in the middle of the vehicle that observes the environment and predicts how people will behave in the future.

“We can then decide, ‘Hey, is this a good time for us to go into the left lane? Should we stay in our current lane? Should we speed up? Should we slow down?” Olson said. “The more data we’ve got, the more predictions we can make, the better behavior from our vehicle.”

The shuttles won't be entirely without a human presence. A fleet attendant will sit in a front seat to help people become accustomed to the driverless technology.