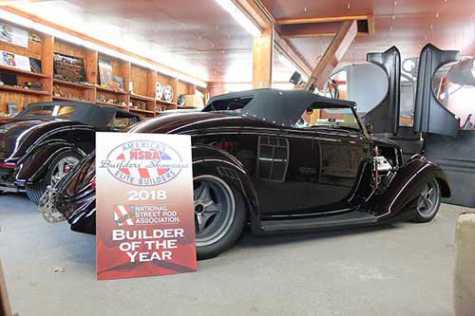 This 1936 Ford Roadster was rebuilt by Dale Boesch of Boesch Auto Body in Humphrey, NE. It earned numerous awards, including 2018 Builder of the Year from the National Street Rod Association during competition at the Louisville, KY, Convention Center. Courtesy photo

The latest build coming out of Boesch Auto Body’s shop in Humphrey, NE, is a 1936 Ford Roadster.

The award-winning roadster is owned by Dana and Marge Elrod of Sunrise Beach, MO.

In January, the car competed in Pomona, CA, where it placed second in the America’s Most Beautiful Roadster contest. A month later, in Del Mar, CA, the car placed in the top five for the Street Rod d’Elegance Award.

In July, it received a Pro-Pic Award in Des Moines, IA.

One week later, at the Goodguys Nationals in Columbus, OH, it was chosen to be in the top five for Street Rod of the Year.

On August 1, the car was displayed, along with 41 other cars, in the lobby of the Louisville, KY, Convention Center, where the National Street Rod Association holds its contest and chooses the Builder of the Year.

At the banquet, it was announced that Humphrey’s Dale Boesch was the 2018 Builder of the Year.

The car will be featured in Rodding USA magazine with an eight-page layout. A photo shoot was done in a studio for the magazine.

Wheel Hub magazine, a new high-end printed book, is coming to Humphrey for a photo shoot.

The next stop for the car is Nov. 1 in Las Vegas, where it will be displayed in the Axalta Paint display at the 2018 SEMA Show, a worldwide automotive trade show.

It will compete for the Mothers Shine Award, the Goodguys Gold Brock Award and the Battle of the Builders, the best car show of the SEMA show.

The Battle of the Builders will air on the Velocity channel in January.

“Cars of this design and quality only happen when there is a group effort,” Boesch said.

He gave credit to “my wife, Joan; the owners, Dana and Marge Elrod; and [my] crew, Daniel McLain, Jim Gronenthal and Jordan Schaecher.”

From start to finish, the car was in the shop for 11 years.