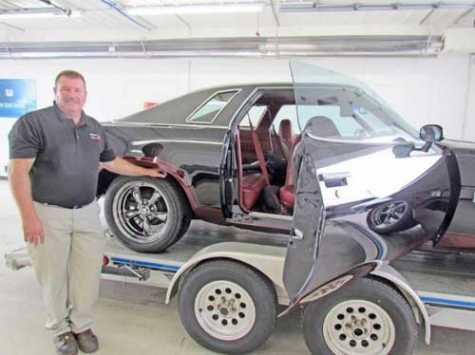 On August 16, the pair held an open house highlighting both businesses.

The 107.7 Rocker Classic Car---a 1974 Chevy Laguna---was on display at Butler Body Shop. Jeff and his crew provided the body and interior work for the vehicle. Napa Auto Parts of Kalamazoo and Boland Tire of Sturgis were also in on the project.

“We get the best car we can for the budget,” Jeff said.

With all the advertisement and patrons dropping in to admire the car, each hoping to win from WRKR, Jeff displayed other prize vehicles they had restored.

Most notably were two owned by Ted Nugent---a 1966 black Ford Bronco that Jeff built from the frame up and Nugent’s zebra-painted Bronco, which Jeff did not have a hand in.

Also on display was a Ford orange beast worth $250,000. It was built by BDS Suspension, a division of Sports Trucks USA of Coldwater, and was painted by Butler.

The truck took home top honors from Ford at the 2017 SEMA show in Las Vagas.

At Broadhead & Bullets, Lori and her staff showed off all the sporting goods the store offers; nearly anything needed for hunting, archery and fishing, along with guns and ammunition.

“We buy and sell guns and offer consignments,” Lori said.

They also have an indoor archery range where leagues play.

Lori opened the store when the Gun Rack, which rented space from Butler, closed. About that time, Gander Mountain also went out of business. Because they had the space, the Butlers expanded into another area of their interests.

We thank The Daily Reporter for reprint permission.