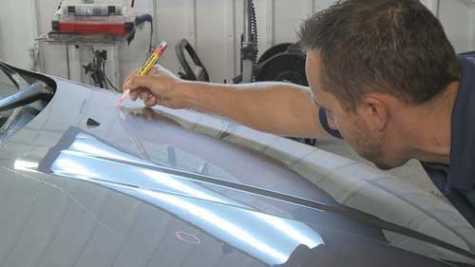 Many parts of the region saw some pretty intense storms the night of August 27. Those storms brought hail as big as baseballs in central South Dakota. Along with that severe weather comes damage.

“From what I can tell so far, maybe the severest that we've seen in Sioux Falls since 2014,” Marv’s Body Shop partner Evan Kindt said.

Severe storms rolled through the area the night of August 27.

“[It] sounded like the roof was coming off. [I] looked out, and there was a bunch of hail and rain. It was pretty crazy,” Sioux Falls resident Derick Christianson said.

On August 28, many were busy checking out the damage.

“A lot of the vehicles on our lot are outside. So we took a look at those. Every single one of them has minor to significant hail damage,” Kindt said.

“At the rate that it’s coming in and what we've talked about this morning, sounds like there’s going to be a lot of damage,” Kindt said.

Many of the cars hit by the storm that took place August 27 may not look like they have a lot of damage. Auto body experts said that if you think your car may have been hit by the hail, the first thing you should do is call your insurance agent.

“Nobody asks for this to happen. It’s one of those things that occur. We never know when and where usually,” Kindt said.

The work then begins at the auto body shop.

“Dropped this off and got an estimate and went and looked at a couple other vehicles to see if they had any damage,” Christianson said.

“We put a light on it like we have here and we circle up the damage so we can show where the dents are at the severity and scope of things,” Kindt said.

Kindt said he thinks it will be awhile before most people stop in because it can be hard to notice the damage.

Kindt said that while there is a lot of damage to vehicles, he thinks it should be relatively easy to fix because it’s not too severe.

We thank KSFY for reprint permission.