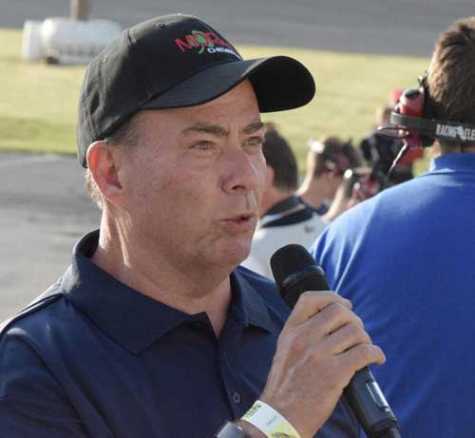 Pat Moran addresses the crowd at Flat Rock Speedway prior to the Stan Yee Memorial 150 July 28. Moran's Chevy dealership is the late model series sponsor at the track, and the company provided three bonus awards for the Yee race. George Pohly

Three decades as a race car owner have shown Pat Moran that involvement in auto racing is like a day at the beach---with chicken pox.

“It’s a disease,” said a smiling Moran, who owns the No. 45 late model driven by Harrison Township, MI’s, Frank Jiovani. “There are happy moments; there are sad moments. It’s rewarding; it’s frustrating.

“I still enjoy it. The key to it is being around good people.”

Moran, who owns three new-car dealerships, including Moran Chevrolet in Clinton Township, has more than a casual interest in racing.

He and long-time buddy Dick Barker, who used to race Moran’s cars, are the owner/crew chief combination for the Moran Automotive Chevrolet that Jiovani drove to a second consecutive ARCA Gold Cup series championship in July.

Moran Chevrolet is the sponsor of the late model division at Flat Rock Speedway.

On July 28, the company raised its involvement with three bonus awards during the biggest late model race of the season at the quarter-mile oval.

Moran Chevy gave a set of Hoosier racing tires to the winner of a drawing, which turned out to be Stan Yee Memorial 150 runner-up Jimmy Thiel, and a $100 bonus to the fastest qualifier, eventual race winner Brian Bergakker. Bergakker collected the $50 Hard Charger award for his efforts in the race.

“It’s the same here as at every track; we couldn’t do it without sponsorship,” Schultz said. “Pat has been involved with us for about 10 years, and to have someone with us for that long has been wonderful.

“His sponsorship allows us to take things to another level [and] lets us do things for the teams and the fans that we otherwise couldn’t do. We’re grateful to have a guy like Pat.”

Moran has been involved in auto racing for about 40 years. As a teenager, he worked on cars at the Mount Clemens Race Track.

“I spent a lot of time there,” he said, but had to step aside when he got into the auto sales business.

Pat Moran addresses the crowd at Flat Rock Speedway prior to the Stan Yee Memorial 150 July 28. Moran's Chevy dealership is the late model series sponsor at the track, and the company provided three bonus awards for the Yee race. Credit: George Pohly