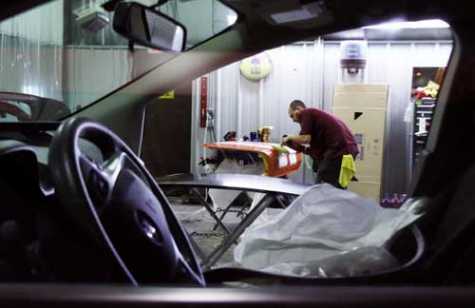 Seen through the window of a vehicle parked in the garage, Kyle Kuhn works on finishing a part that was recently painted July 24 at Coachwork Auto in the town of Addison, WI. The body shop is looking to add a 5,000-square-foot expansion beginning in August with a competition deadline of Thanksgiving. John Ehlke/Daily News

An expansion at Coachwork Auto Body Inc. in Addison, WI, will add 5,000 square feet to the business in an effort to create greater efficiency in light of a quickly growing customer base.

Purchased by Mike Held and Jason Lisko about two years ago, Coachwork will nearly double in size by Thanksgiving if construction goes as planned. The owners don’t expect any work on the business to result in the body shop closing down.

“It’s been [in] a state of flux since the moment we started,” Lisko said.

Held said the area is growing, and he and Lisko often hear good talk of the work they do and see good reviews on Google.

The business has expanded its floor space under the ownership of Lisko and Held, who remodeled a portion of the building after taking over. The new project will be done with local contractors.

“We also pretty much doubled our employees (since taking ownership),” Held said.

They intend to hire another person for the shop and may hire another office position. The first part of the project will be to remodel the office area.

“It’s been awhile since the office got some love,” Lisko said.

The waiting area attached to the office space will see improvements as well. They will include a TV, free Wi-Fi and a cooler with water.

“It’s only Tuesday, and we have just an aisle here,” Held said.

The storage space will take over the current break room, and the new break room will see some upgrades similar to the waiting room. It will also come with access to online training.

The auto body shop located in Allenton has been in business for nearly 40 years and covers about 8,400 square feet. After the expansion, it is expected that about 90 percent of vehicles will be stored inside.

Lisko said the goal is greater efficiency in the work space.

The pair of owners wants the office and waiting room area completed first, as the busy season is approaching. August and September are typically busier, as new drivers are on the road going to school and deer are starting to become more active.