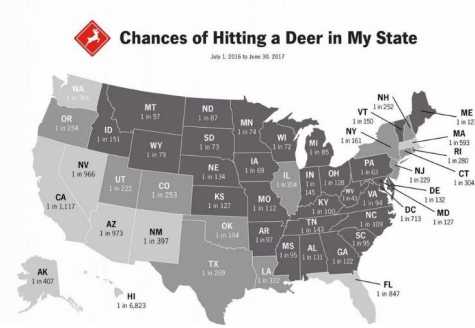 About an hour before the Mark Twain Lake fireworks show on June 30, a large deer zoomed across State Route J, about 500 feet south of the Cannon Dam, forcing a pickup truck driver to slam his brakes.

The driver was lucky. He narrowly missed the deer.

However, many Missouri drivers are not as fortunate. Travel U.S. Highway 24, Missouri Route 15 or any number of side roads, and chances are that most days, drivers will encounter the carcass of a deer that has been hit by a vehicle.

The Missouri Highway Patrol estimates that there are more than 3,500 deer auto accidents each year—about once every 2 ½ hours. Mostly, the accidents take place in the fall, but many auto body shops are seeing deer strikes even in July.

“It is an unusual year,” said Stacy Miller, manager of the body shop at Moberly Motors. “We have seen a high number of cars damaged by deer in May, June and into July now. It is much later in the year than I recall.”

Miller said that her body shop has averaged about two cars per week, with deer damage in the last three or four months.

But it’s not just deer. Raccoons, opossum, armadillos and other creatures scurrying across a roadway can cause significant damage to cars.

“We had one lady who hit a bobcat,” said Gregg Smith, manager of the body shop at Thomas Motors in Moberly. “It stuck in her car’s grill and was still alive for a while.”

But it’s deer that cause the most damage.

Brandon Anderson, who owns Anderson Body Shop in New London, said that damage from deer collisions can get expensive.

“It is not unusual to see $5,000 in damage,” he said, adding that some claims can be $10,000 or more, and that many times, an insurance company will declare the vehicle a total loss.

So why all the deer strikes this time of year?

Some people speculate that deer population is on the rise.

Not so, says Missouri Conservation Officer David McCorkell. He said the deer population is relatively stable. Much of the issue, he said, is related to migratory patterns of the animals, which may explain some of the late-season deer-car accidents.