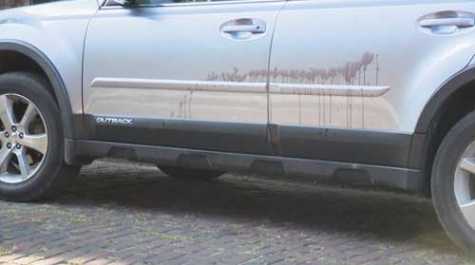 Dozens of cars in German Village and Clintonville, OH, were found vandalized July 10 with either spray paint on them or damage from "keying." WSYX/WTTE

There are no leads so far as police continue to investigate dozens of cases of car vandalism in German Village and the south side of Columbus, OH.

Detectives want to know if the crimes reported July 10 could have been done by the same people who spray-painted and “keyed” at least a hundred cars on the north side and Clintonville area the weekend of July 7--8.

People were busy trying to clean up the spray paint on Sycamore Street. Brennan Winkler said he is dismayed by the damage.

”This is not my car,” he said. “I borrowed my dad’s white car to go on a camping trip. We couldn’t fit everything. I was pretty bummed when I saw this happen to my dad’s car.”

Winkler was using soap and water to scrub off the black paint.

“I just looked it up on Google and there are some really good forums with auto body shops that said start with soap and water and if not, try to find some type of acetone,” he said. “I hate to say [that] I was young once too, and I found stuff that was like this entertaining. So there is a part of this that I wonder if it is just coming back to me to get me on the other side. But you know, I wish people could find better things to do.”

“The light-colored vehicles seemed to be getting spray-painted, where the darker-colored vehicles were getting keyed,” said Ayers, who believes somebody was in the passenger seat of a car, window rolled down, with spray paint and sharp objects.

“By the time you roll down the street, you are going to get 30 cars in 60 seconds,” said Ayers.

Police said they hope residents review and provide home surveillance video that could lead investigators to the culprits. The vandals could face felony charges.

We thank WSYX for reprint permission.