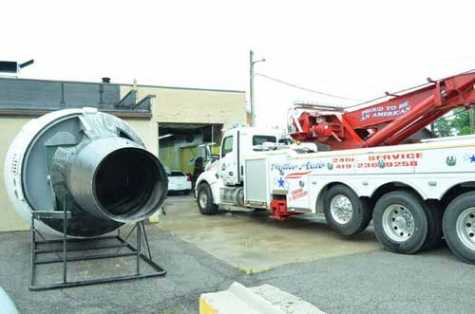 The replica Gemini capsule from the Armstrong Air and Space Museum was transported to Auglaize Auto Body in Wapakoneta, OH, June 5 for restoration. Bryan Reynolds | The Lima News

The replica Gemini space capsule lifted off from the Armstrong Air and Space Museum the morning of June 5 and set down at Auglaize Auto Body on Auglaize Street in Wapakoneta, OH, to undergo some restoration work.

“It’s mostly paint,” he said. “They’re going to strip it down to the base and put a nice layer of paint intended to withstand the environment it will be subjected to.”

Burton said the last time the Gemini capsule was restored was around 2000. Every so often, someone would add a layer of outdoor paint to it, but Auglaize Auto Body will add a paint specifically made to withstand the constant weather, contact and sun to which the capsule is subjected.

Patterson said they will ultimately restore both the Gemini and Apollo capsules, beginning with the Gemini. He and his employees will strip the paint completely off both capsules and do some necessary repairs. They will repaint the Gemini cockpit so it’s more historically accurate and repaint the exterior.

“Everybody is excited about it, especially me,” Patterson said. “This is a once-in-a-lifetime opportunity. Not many body shops can say they’ve done something like this. We’re donating a ton of labor to them just for the chance to do it.”

Scott Bowersock, of Bowersock Signs-N-Lines in Wapakoneta, will be painting the hand lettering and American flag that was on the original.

“That’s a neat deal,” he said. “When anybody ever asks where you’re from, they say, ‘Wapaka-what?’ Then when you say [it is the] birthplace of Neil Armstrong, the first man to walk on the moon, they get it.”

Patterson is estimating it will take six to eight weeks to complete the Gemini project.

We thank The Lima News for reprint permission.