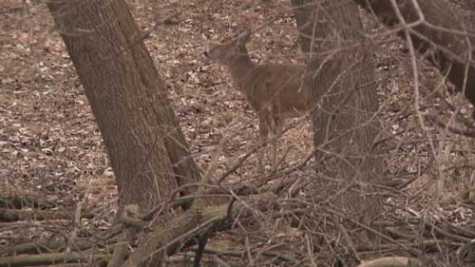 You might have noticed more deer on the side of the road.

That's because the month of June is an active one and usually has a spike in car-deer crashes, according to the Wisconsin Department of Transportation.

"The big thing is, June is when the female deer have their fawns right now and they're moving around a lot, so there's a lot more activity. It's kind of a combination of it becoming summer so there [are] more vehicles on the road, speeds are creeping up and the deer activity is going up; it's all of those combinations coming together," said Safety Engineer Scott Nelson.

In Northeast Wisconsin, some counties are worse than others.

While Dane County had the most deer crashes last year with 959, Manitowoc County came in third with 788, followed by Shawano County with 775.

Waupaca, Outagamie, and Fond du Lac Counties all fall within the top 10.

"I think statewide, we had a little over 20,000 car-deer collisions. Unfortunately, nine resulted in fatalities and six of those were motorcyclists," added Nelson.

Ron Goss owns an auto body shop in Menasha. He said damage from deer collisions always tends to pick up in early June and that this year is no exception.

If you are driving and spot a deer, experts say the worst thing you can do is swerve. Instead, stay the course to potentially minimize damage and avoid hitting something else like a guard rail, or even another vehicle.

We thank WBAY-TV2 for reprint permission.