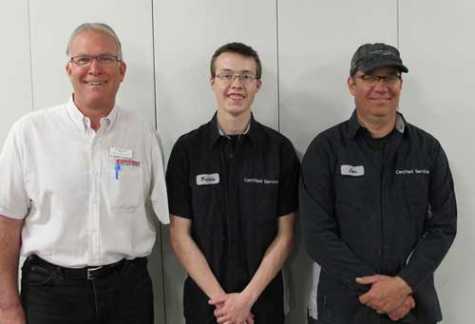 Travis Steindl always had an interest in cars. While a student at Oostburg High School in Oostburg, WI, he had a part-time job as a lube technician at Carlton Automotive, changing oil, rotating tires, mounting and balancing tires, performing state emission tests and filling out work orders.

At the very beginning of his senior year, Steindl learned about and applied for a youth apprenticeship through Lakeshore Technical College. He interviewed with Jeff Wiegand, collision center manager, and John Michaels, auto body technician and refinish specialist, both at Sheboygan Chevrolet.

“I gave him the tape test,” Michaels recalled. “You just simply do a straight line masking; it’s just a quick guide to see what kind of possibilities he might have. It sounds easy, but for some people it isn’t. Travis made it look easy. Between that and the recommendation he got from his high school shop teacher, who really gave him some good remarks, he was an easy choice.”

With his acceptance into the youth apprenticeship program, Steindl was on his way.

“I wanted to do something with cars; this opened up and I got into it, and I just really like it,” he said.

When asked what he likes about body repair work, he said just about everything.

"You know, the fact that I get to work with my hands and at the end of the job, I can stand back and see that I’ve taken a wreck and really made it into something,” he said.

During his senior year of high school, Steindl got out of a couple of classes each day to work a few hours of on-the-job training with Michaels, who acted as his youth apprenticeship mentor.

“He’s a quick learner and within less than six months, he was repairing damaged body panels and doing it effectively and beautifully. He could refinish a panel too. He has a natural knack for it,” said Michaels, who also was required to grade Steindl’s work per youth apprenticeship guidelines.

Steindl graduated from high school in 2017 and went on to study in the automotive collision repair and refinishing technician program at Lakeshore Technical College. He also continued working part-time at Sheboygan Chevrolet.