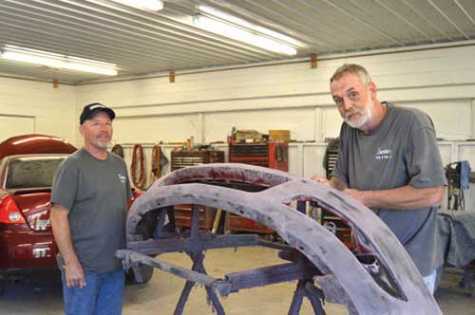 Seventy-three years is a long time for an auto body shop to be in business, but the post-World War II automobile boom couldn’t have been better timed for Easley’s Body and Paint Shop in West Plains, MO, which first opened doors in 1945.

Over the next 10 years, the automobile industry would quadruple production, according to Encyclopedia Britannica, and between 1945 and 1980, motor vehicle production increased ten-fold, researchers from the University of Gronigen in the Netherlands reported. Hindsight seems to suggest Truman Easley’s decision to open an automobile body and repair shop at the onset of the boom was perceptive, if not shrewd.

Today, the shop has continued to adapt to its customer base and performs repairs and body work on a multitude of vehicles made for land and water travel. Now under the leadership of owner/operator Roger Harper, the company aims to offer quality collision repair and partners with other area businesses to put customers’ needs first, said Shealia Harper, shop manager and Roger’s wife.

Roger took over ownership of the business in 2009 from Brock Moore, who had bought it about 15 years before from Easley, Shealia said. Roger has been with the company for about 25 years, as has the shop’s only other employee, Jerry Wood.

For at least 25 years, Easley’s Body and Paint Shop has been located at 4719 U.S. 160, about three miles south of West Plains city limits. Services offered in addition to general auto body work and repair include windshield and window replacement, collision repair, spray-on bedliners and auto body paint. Shealia said the company stands out because of its dedication to quality work and customer service.

“We treat people like we want to be treated,” she explained. “We want people to feel they’re well taken care of.”

Every step of the way, she added, customers are partners in their own projects as the company makes an effort to give customers exactly what they want, affordably.

Easley’s Body and Paint Shop works with all insurance companies, increasing accessibility for many customers. In addition, the company guarantees its work for as long as the customer owns the vehicle on which work was carried out.