Written by Karl Evers-Hillstrom, The Globe 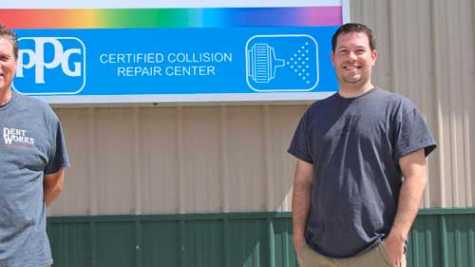 Steve (left) and Cliff Lynn are pictured outside of Cliff's Auto Body & Glass in Adrian, MN. Karl Evers-Hillstrom / The Globe

The Adrian, MN, auto body repair shop has a new owner and different sign, and customers are asked to enter through a different door than before. But other than that, the nuts and bolts of the business are exactly the same.

If it ain’t broke, don’t fix it, right? Well, in this shop, there are a lot of broken things and a whole lot of fixing going on.

Steve Lynn, who has run the shop for the better part of four decades, retired and handed it over to his nephew, Cliff, in May.

Steve and Cliff followed a similar route on their journey to the auto body industry. They grew up in the same room in the same house on the same farm located south of Adrian---separated only by a few decades.

They both learned to work on cars at a young age. Cliff got his experience working on a dirt race car driven by his mother, Shellie, who was a popular racer in the Worthington area. Years later, he got his hands dirty working on his own race cars and was hired at Dent Works in 2007.

Steve got his training at a high school vocational program in Luverne. After a few years working at an auto body shop in Worthington, he started the store as L&H Body Shop along with Gary Hoffer in 1980. Steve took full control in 2005, renamed it, expanded the shop and introduced paintless dent repair.

“That really expanded my customer base out to the surrounding communities, even out of state,” Steve said. “If they had a dent, a deer accident [or] hail damage, they’d come back here and have it repaired.”

Having worked on thousands of cars, Steve has seen everything. That includes the time when a customer came in needing repairs to their windshield---which had a deer’s antler stuck in it.

When the time was right to retire, Steve knew he had a great successor waiting in the wings.