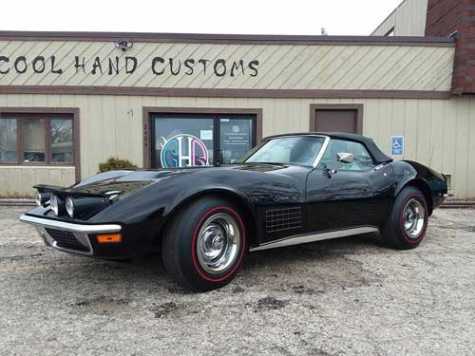 He's known for his ability to make anything out of nothing. His fabrication and welding skills are remarkable. He's an artist who works in a wide range of mediums and she is someone who isn't afraid to do whatever it takes to restore a car and make it look spectacular.

EJ and Amy Fitzgerald, the co-owners of Cool Hand Customs in Middleton, WI, recently celebrated their company's 10th anniversary. It hasn't been an easy ride, but by working hard and leveraging their stellar reputation, this couple is now firing on all cylinders and garnering rave reviews from their sponsors and satisfied clients.

A mega-talented duo, the couple fell into car restoration after working in construction remodeling homes for many years. When the economy imploded in 2008, Amy and EJ---with a 3-year old at home---decided to take out a loan and start Cool Hand Customs.

"We borrowed $13,000 and started the business in our 400-square-foot garage at home," Amy said. "We decided we might as well take a leap of faith and chase our passions. Back then, we primarily restored and painted motorcycles and did very well because EJ is a talented airbrush artist. He sees the world in 4-D just like our daughter, Jade, does. But I don't, so we play different roles within the company and complement each other very well. I have always been a huge car buff and he is a motorcycle guy, so we started by working on motorcycles and then went on to building cars, and it just kind of worked out."

Six months after opening its doors, Cool Hand Customs went to its first SEMA Show with a large extended cab Dualie they painted for a client. Things have gotten better for the company ever since.

"We realized right then that this is where we wanted and deserved to be, so we really stepped up our game and took it to the next level," Amy said. "The American flag that EJ painted on this vehicle is so realistic, it's remarkable. It got a lot of attention. When we got home, we moved into a 4,000-square-foot facility and now we're actually growing too big for that space and need to move again."

View the embedded image gallery online at:
https://www.autobodynews.com/index.php/midwestern/item/15641-wife-husband-team-creates-amazing-vehicles-at-cool-hand-customs.html#sigProIda30915e17b
More in this category: « Kickin' Kolor in Davenport, IA, Is All About Custom Colors, Valuable Training Michigan Stakes Claim as Global Leader of Autonomous Vehicle Industry »
back to top