Written by Terrence Dwyer, The Messenger 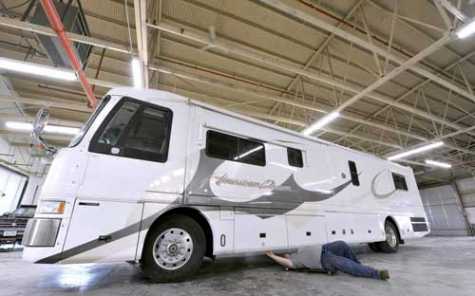 The Truck Doctors' manager, Doyle Richardon, looks over an RV brought in for work recently. The large shop allows them to work on several of them at once. Messenger photo by Hans Madsen

In early April, he launched The Truck Doctors at 3375 Fifth Ave. S.

“We’re focusing on semis and RVs,” Waller said. “Major stuff. Fabrication work. It’s pretty much body work. With the RVs, we’ll be doing all the maintenance of those things.”

While body work and vehicle painting will be at the heart of the projects The Truck Doctors handles, other services are also available, including installing and repairing electronics.

“Basically, full service on RVs,” said Doyle Richardson, who manages the business. “We’ll be doing winterizing, awnings---everything to do with RVs.”

Waller said he believes this new venture responds to a growing need that has been largely unmet in this part of Iowa.

“With the semis, there aren’t really many people doing what we do,” he said. “We’ve had a good response from a lot of truck drivers.”

Waller said the strong economy is causing greater consumer interest in RVs. He said the array of services The Truck Doctors offers is very much in sync with that trend.

“The initial response has been pretty good,” he said. “We haven’t done any marketing yet at all. Even without that, it’s been pretty steady with people calling.”

Waller said he expects The Truck Doctors to attract customers from a wide area.

“For Troy Waller Auto Body, I probably draw from 30 or 40 miles,” he said. “With this, I’d feel comfortable saying probably a couple hundred miles. Semi drivers are used to driving long distances. With RVs, they’ll travel to get service taken care of.”

This new enterprise is a separate business from Troy Waller Auto Body, 508 S. 32nd St., which Waller created and owns. The Truck Doctors was inspired by the need for a shop that could perform assorted work on large vehicles, he said.

“We needed more room,” Waller said. “The idea’s been kicking around for a couple years. People would come by with a semi and RVs. I couldn’t get them in my shop due to the doors. This came available and I decided to give it a whirl.”

View the embedded image gallery online at:
https://www.autobodynews.com/index.php/midwestern/item/15560-the-truck-doctors-handles-big-vehicles-in-fort-dodge-ia.html#sigProId78f4e0d4f6
More in this category: « Missouri Anti-Vehicle Safety Inspection Dies at the End of the Session 3 Complete Zara’s Collision Center Apprenticeship Program in IL »
back to top