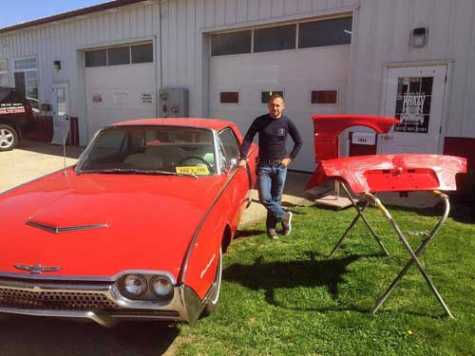 Steven Ignacek, owner of Kinda Krazy Kustoms, poses with his 1962 Ford Thunderbird in front of his auto shop at 1864 Sycamore Rd. in DeKalb, IL. Josh Tolentino

Steven Ignacek said he runs his auto shop on principles of honesty, integrity, comfort and relationship-building above all else.

“This industry is very cutthroat,” he said. “There are so many competitors out there. Many shops cut corners. I’m not into that. I don’t do that.”

Ignacek, owner of Kinda Krazy Kustoms, at 1864 Sycamore Rd. in DeKalb, IL, started his business inside his own garage in 2013. His clientele at first consisted of family and close friends. It didn’t stay that way for long.

Quality service and honest pricing helped his business grow, he said. Ignacek moved to his current location less than a year after opening.

“The joys about being an owner and since opening my doors are the people I meet,” Ignacek said. “The satisfaction I get is more rewarding than the paycheck itself.”

Ignacek, a Sycamore resident, has always been around cars. Growing up in Naperville, he helped his grandfather, SL Gordon, with anything that was needed around the family’s junkyard.

He tinkered with cars and quickly found his passion.

“I got bit by the auto bug,” Ignacek said. “I always wanted to learn about cars. I wanted to know how things worked and how to fix them.”

After graduating from Waubonsie Valley High School in Aurora, Ignacek went to College of DuPage, where he earned a certification in automotive service excellence. He worked several years for a towing and repossession company before becoming a full-time truck driver.

Ignacek was making good money, but said he knew something didn’t feel right.

“I got tired of hearing people getting ripped off by other mechanics and body shops,” he said. “That’s how I started Kinda Krazy Kustoms. I wanted to take care of customers. I heard some prices of what friends and family were paying. I thought, ‘How is that possible?’”

Ignacek has kept his circle small. He has only two full-time employees. The shop completed 40-plus full-body restorations in 2017, Ignacek said. He hopes to move to a larger garage soon.

“I want to provide honesty.”