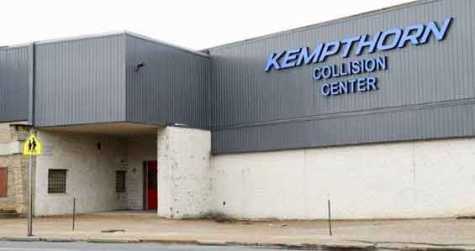 The siblings are continuing the family legacy, Eric Kempthorn said.

“We’re working with the foundation Dad built for us---taking care of people,” he said.

The dealership sells new Volkswagen, Mazda, Volvo, Mercedes-Benz and Jaguar vehicles, along with Sprinter commercial vans that are made by Mercedes. The whims of auto manufacturers have factored into changes in the brands sold by Kempthorn through the years. Restructuring by General Motors led to the closing of Kempthorn Buick in 2013, and changes at Chrysler ended the dealership’s ties with that car marker.

Nearly all of the Kempthorn operations were brought together at 1449 Cleveland Ave. NW in 2001. That site has grown since James O. Kempthorn relocated there in 1948. A new showroom was built in the 1980s and there were expansions in the 1990s.

Moving the collision center to the new building will open space in the Auto Mall, but no decision has been made on how the space will be used, Kempthorn said.

The dealership has about 80 employees, and Kempthorn credits efforts of the workforce for the business’s success.

“We’ve been fortunate with our employees,” he said, noting that many of the workers have had long careers with the dealership. “A key to our success has been the longevity and experience of an incredible group of employees.”

We thank The Canton Repository for reprint permission.

View the embedded image gallery online at:
https://www.autobodynews.com/index.php/midwestern/item/15359-collision-center-to-be-added-to-kempthorn-motors-in-canton-oh.html?start=1#sigProId94f06c2096
More in this category: « ICS Collision Center Finds Room to Grow in Derby, KS One Way Collision, Brickner’s Break Ground on Joint Venture in WI »
back to top