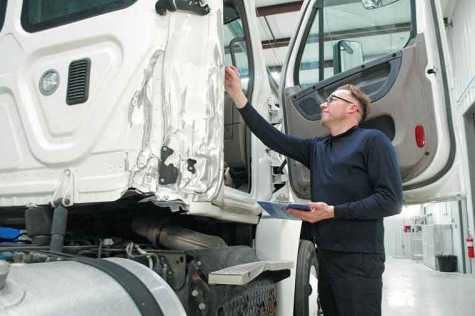 James Wilson II inspects a truck cab at the new location of ICS Collision Center in the West End Business Park. Along with standard auto body repairs, the company handles work on large vehicles, such as trucks, RVs and municipal equipment. DAVID DINELL/INFORMER

James and Tera Wilson knew they needed more room for their business, ICS Collision Center, as they were outgrowing their site at 47th Street South and K-15.

The question for the vehicle body repair business was where.

New sites along the Rock Road corridor, while attractive, were priced too high. They wanted to stay in the area, so they kept looking and found exactly what they wanted: a building at 920 N. River in the West End Business Park in Derby, KS.

The property was in bankruptcy proceedings and set for auction, but the couple put down the money and signed on the line before a gavel could go down.

“Honestly, it wasn’t a planned event,” James Wilson II said of how the situation worked out.

But he and Tera are pleased it did.

“Three of us shared a space smaller than this room,” Wilson said as he waved an arm around his new office.

There’s a lot of space for all the vehicles---including large trucks and RVs---that they and their five employees work on.

They also have a sizable break room and large customer waiting area.

While they’re at the end of a turnaround in the park, Wilson said the location is not an issue.

“We’re a destination,” he said. “People don’t cruise around looking for a body shop. They go to one because they need to.”

The Wilsons have owned the company for five years and he has been in the industry for 31 years.

It’s a field Wilson is passionate about.

“I was really blessed to be in a shop where technicians showed me the right way,” he said.

He’s worked in the vehicle repair aspect, too, but that’s “easy” compared to the complexity of auto body and restoration.

A reason for that is because after an accident, a vehicle needs to be restored to its previous shape---or better---with safety at the forefront.

Previous Page Continue reading »
Read 2309 times
More in this category: « 14 Charged With Drug Sting Operated out of Chicago Auto Body Shop Collision Center To Be Added to Kempthorn Motors in Canton, OH »
back to top