Written by Robert Connelly, The Register-Mail 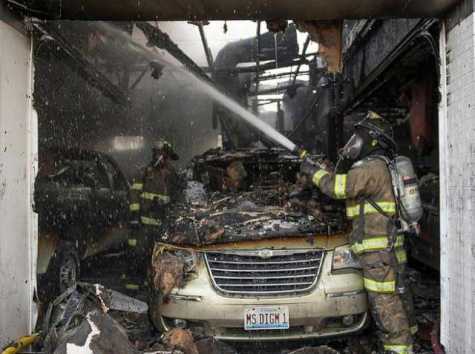 Dave’s Autobody’s detail shop, 2171 Grand Ave. in Galesburg, IL, was ravaged by fire early the morning of April 7, but the flames did not spread to the paint shop or the main structure.

Galesburg fire crews were dispatched to Dave’s about 5:20 a.m. April 7. While responding, a person called 911 and said they heard an explosion, which was believed to be caused by chemicals stored in the detail shop, said Galesburg fire Battalion Chief Todd Peterson. According to Fire Chief Tom Simkins, Engine 52 from Brooks Street Station arrived within two minutes of the call and found heavy black smoke pouring from the detail shop.

Simkins said overhead doors were forced and cut open to gain access to the fire in the middle of the building. Using three hoselines, crews were able to get inside and bring the fire under control in about 30 minutes. The fire burned through the roof and there is extensive structural, heat and smoke damage to the building.

Grand Avenue was closed for a few blocks as crews continued to clear the ceiling area of the detail shop to make sure the blaze was out. The fire was under control by about 6:30 a.m.

Peterson said city street crews would likely be called to lay down rock salt before the street reopened because of ice forming from water used to put the fire out. The temperature was about 19 degrees as crews fought the blaze, but the “feels like” temperature was closer to 10 degrees.

A few firefighters slipped on ice, but they were OK and no injuries were reported.

Peterson said the fire was believed to have started in the office area of the detail shop, but the cause of the fire was under investigation.

He further said there wasn’t much concern with the blaze spreading to other buildings at Dave’s.

About seven cars were inside the detail shop at the time of the fire; some received only smoke damage while others were damaged by the intense heat. Galesburg fire officials did not have an estimate of the loss early April 7.