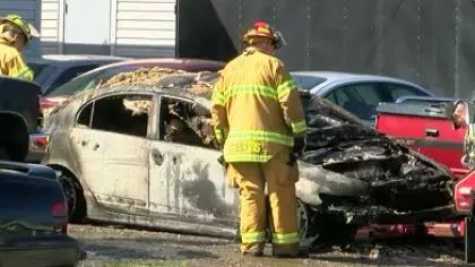 A man was seriously burned when a car caught fire at a Springfield Township, OH, body shop on the morning of April 4.

The incident happened at KK & Son Auto Repair in the 2200 block of Wilson Avenue.

Fire officials said the man was found by his wife and pulled from the burning car.

“His clothes were burned, his hair was burned… it was pretty rough," witness Kristi Distler said.

Firefighters said it started as a car fire and then spread to the business.

“When I came up the building was on fire pretty good. There were a lot of explosions going on inside the building. They were worried someone else was in the building, but his wife said they were the only two there," witness Vincent Jones said.

Distler said she felt the explosions from down the street.

“It was a loud explosion. I was at my house down the street, but it shook. They said they were afraid something was going to come out of the door over to the daycare over here," she said.

No one at the daycare was injured.

The victim was taken to UC Medical Center with serious burn injuries.

“The firemen---they did a hell of a job. They got there and it was a very dangerous situation for them just to walk up to the building. They attacked the fire, they stayed on it and they knocked it down," Jones said.

Firefighters said that damage to the business is estimated at $100,000.

There is no word on the victim's condition.

The cause of the car fire is not known at this time.

No other injuries were reported.

View the embedded image gallery online at:
https://www.autobodynews.com/index.php/midwestern/item/15234-man-seriously-burned-in-car-fire-at-springfield-twp-oh-body-shop.html#sigProId3188233f23
More in this category: « Michigan Auto Insurance Rates to Increase 13% per Vehicle Fire Guts Detail Shop of Dave’s Autobody in Galesburg, IL »
back to top