Fire at CARSTAR in Troy, OH, Causes $1 Million in Damages 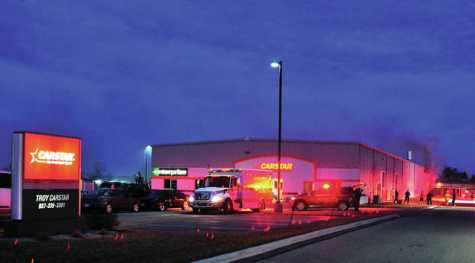 An estimated $1 million in damage to 19 vehicles, five RVs, the building and its contents have been reported following a fire at the Troy, OH, CARSTAR auto body shop on Kings Chapel on Feb. 27.

The fire was reported around 6:25 p.m. Feb. 27 by a passer-by who heard the smoke alarms and saw smoke coming from the vents in the back of the building.

According to Assistant Chief Gary Stanley, the cause of the fire is still under investigation. Fire investigators are still trying to determine the exact amount of damage. No one was inside the building and no firefighter officials or personnel were injured in battling the blaze.

Stanley also said the business’ paint booth was completely destroyed. He estimated it took two hours to contain the fire before officials could overhaul the building and its contents.

Stanley said business owners were working to restore electricity to open the businesses’ offices, including Enterprise Rent-a-Car, that same week.

All three Troy fire stations reported to the scene, as well as Covington and Piqua fire departments. Casstown Volunteer Fire Department also was on stand-by at Station I in Troy during the incident.