Nebraska Native Uses NPCC as Springboard to Pursue his Passion 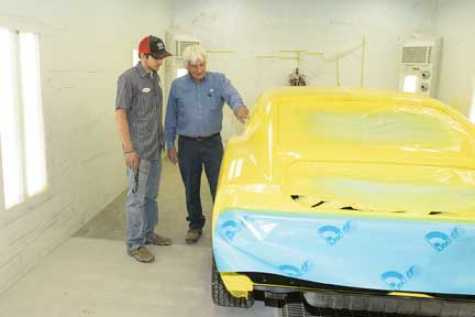 “Choose a job you love, and you will never have to work a day in your life.”

Anthony Hill is living proof of that adage. Where he is now is exactly where he always wanted to be.

“I do classic car restoration at The Car Doctor in North Platte,” said Hill. “I love it. My dad always worked on old cars, and from the time I was big enough to walk, I was in the garage trying to help him.”

Hill’s passion for all things automotive continued through his teen years. By the time he graduated from Pleasanton High School in 2014, there was no question what he wanted to do with his life.

“I began looking at schools that could help me break into the restoration industry,” said Hill. “I looked at Southeast Community College at Milford and some other schools in the eastern part of the state, but none of them offered exactly what I was looking for.”

“I really liked the fact that the projects his students were working on were all classic cars,” said Hill. “That’s what really brought me to NPCC. I hadn’t seen anything like it.”

“I always thought of college as being a lot of bookwork and paperwork, but with Don and [Bryan Herrick, Automotive Technology instructor], it was a lot of shop time,” said Hill. “I think that’s the best way to learn, and that was my favorite part about NPCC---the hands-on experience.”

Much of that hands-on experience comes in the form of the college’s raffle car. Every year, students in NPCC’s transportation department either restore a classic car or build one from the ground up. The vehicle is then raffled to raise money for scholarships and production costs associated with the next year’s project.

“The Roadster was my favorite,” said Hill. “I worked on it more than the other vehicles. I built the motor and did a lot of the framework.”

The Mustang and the Impala were restoration projects. They were reduced to a bare shell, then reconstructed and modified using a combination of traditional and modern engineering and technology.

The Roadster is different in that it is a new car built entirely from scratch with Speedway parts. Both types of projects taught the students about chassis, electrical systems, drivetrains, engines, refinishing and upholstery.

“I like the history behind the classic cars,” said Hill. “It’s cool to see how things were done back in the day. Learning both those traditional and modern methods at NPCC really prepared me for what I do now. We take brand-new motors and put them in cars [that are] 60 years old.”

Hill graduated from NPCC in 2017, but his instructor’s influence didn’t stop there. Wilson put Hill in contact with The Car Doctor when a job opening became available, and the rest is history.

“I’m very lucky to be working where I am,” said Hill. “Right now I’m just trying to learn as much as I can, and time will tell how far I go. One thing’s for certain---I’ll always be doing some form of restoration.”