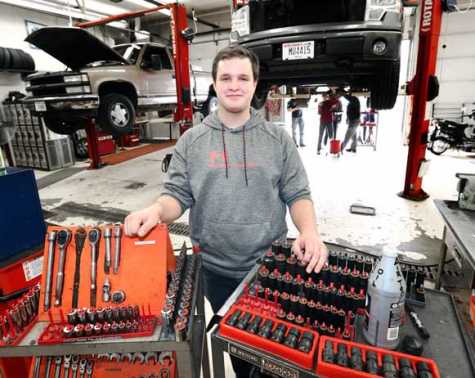 Counselor Julie Arentz did a double take when Caden Kane walked into her office in November 2016.

Recovering from an intensive surgery for a Chiari malformation, the resilient West Salem High School junior wasn’t due back for months, but has never been one to take it easy.

Throughout his high school career, Kane, now a senior, has seen obstacles pop up at every corner, from multiple medical procedures to family strife. And yet when many would crumble, Kane stood tall, showing the initiative, positivity and unrelenting work ethic that earned him the La Crosse Tribune Extra Effort Award.

“Caden’s been in a lot of tough situations, and he’s made his way through them,” said West Salem High School technology and engineering instructor Paul Liethen, who nominated Kane for the honor along with Arentz. “He’s continued to make good choices, even under the most trying circumstances.”

Kane was a sophomore football player when he first experienced a rapid heart rate. Finding his chest pounding and struggling to breath, Kane was fitted with a cardiac monitor, which recorded rates of up to 250 beats per minute. A resting heart rate of between 70 and 100 is considered normal for a teenager.

Diagnosed with paroxysmal supraventricular tachycardia, an episodic condition of elevated heart rate, Kane underwent a cardiac ablation in Sept. 2015, which scars and destroys the triggering tissue in the heart. He returned to school the next week, resuming football as well.

That semester, Kane joined Liethen’s automobile fundamentals course and quickly developed a passion for mechanics. Having struggled in his core classes, Kane was a natural in the auto body shop, and joined Liethen’s weekly automotive technician training night course his junior year.

“It felt like knives being stabbed in my arms,” Kane said of the pain radiating through his forearms. “On a scale from one to 10, it was a 15.”

Initially identifying his pain as nerve damage from a torn muscle, doctors recommended physical therapy and a CAT scan. Despite his physical therapist’s insistence the screening wasn’t necessary, Kane underwent two scans, which revealed his Cerebrospinal fluid was herniating the cerebellar tonsils, exerting pressure on the spinal cord and brainstem.

“They told me my brain was too big for my head, which was kind of funny,” Kane recalled.

Transported to Mayo Clinic, he underwent posterior fossa decompression in Oct. 2016, requiring an incision on the back of the neck and the removal of a portion of skull and vertebrae.

His physicians estimated he would miss up to four months of school, and while the recovery was uncomfortable, Kaden, who jokes of his high pain tolerance — “I’m tough. I’m used to pain,” he remarked — was most concerned with falling behind.

“Missing school and making up the work was the [scariest] for me,” Kane said.

Just weeks into his recovery, Kane walked to the school and approached Arentz for more homework to take home, teachers and classmates swiveling around in surprise at his presence.

“He didn’t miss a beat,” Arentz added. “He was an advocate for himself.”

Kane resumed his regular school schedule, as well as his Tuesday evening auto course, where he took on a mentoring role with the younger students.

“Where Caden shines is in the shop,” Liethen said. “He is absolutely the leader in our night class. It’s tough to hold him back... he’s always a couple steps ahead.”

In June 2017, he applied for the Youth Apprenticeship program at Dahl Ford on Liethen’s recommendation, putting in 45 to 50 hours during the summer at the Onalaska location. Upon resuming school his senior year, Kane kept up a packed schedule, juggling a full course load with 30 hours at Dahl Ford.

Tension with his mother and stepfather, which had developed over the summer, reached a boiling point just before the semester began. Kane chose not to elaborate on the circumstances of the conflict, but found himself temporarily without a place to live last August, first staying with his girlfriend’s family while she attended college in Winona, and now residing with his maternal grandparents. He found much-needed encouragement in both homes, as well as at school.

“They’ve been a great deal of support,” Kane said. “My grandma is the kindest person you would ever meet. Mr. Liethen’s been a big [source of] support.”

Despite the turmoil in his home life, Kane kept up with his responsibility, putting in up to 15-hour days. Arriving at Dahl at 6 a.m., he logs an hour of work before arriving at school for his five daily classes, returning to the dealership until 6 or 7 p.m. On Tuesdays, work is followed by his three-hour night class. Homework is completed when he arrives back home around 10 p.m., or squeezed in intermittently during the day. For his senior exit project, Kane is fixing up his 1986 F-150 truck---his thesis on the benefits of shop courses.

Kane plans to apply for the automotive technician program at Western Tech, and hopes to enter the Ford ASSET (automotive student service educational training) program at Hennepin Technical College the next year.

“I’m working my butt off for it,” Kane said of the coveted six-semester program. “I really want it.”

Arentz and Liethen marvel at Kane’s upbeat attitude, noting the “intelligent and hardworking“ refuse to accept pity, powering through without complaint.

“He’s just kept in stride,” Liethen said. “As a freshman, if I had known the course that was facing him, I would have said no way he’d be (this successful). He’s going to be a great auto tech someday soon.”

Read 721 times
More in this category: « KY College Receives $4,000 to Fund Scholarships for Automotive Students Lincoln, NE, Has More People Driving More Miles, but Fewer Crashes. Why? »
back to top