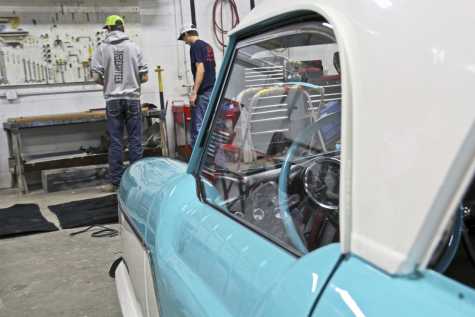 One recently restored, ‘50s-era car was on display at Kansas City’s World of Wheels event the weekend of Feb. 9--11.

Ronald Wiederholt and his students have worked throughout the school year to restore the donated vehicle from a state of rust and dents to its original polished condition.

“It was a mess,” Wiederholt said. “It had rust; it had old dents and old fillers. So we had to take it all the way down to metal.”

While Wiederholt himself has plenty of experience in body work, having run his own shop in the past, he likes to highlight how much work is done by the high school juniors and seniors who take part in the program.

“I’ve got 26 [students], and all 26 of them have had their hands all over this thing,” Wiederholt said.

Working with older cars like the Metropolitan has its own challenges, according to Wiederholt. Often, cars require the students to learn how to repaint, re-weld and re-wire. Sometimes parts are not even available to purchase for older models.

“You run into everything on these---like other nasty body work that’s been done previously,” Wiederholt said. “The side chrome is not available, so we had to actually ping it out, sand it and polish it all to save it.”

Jimmy Raymond is in his second year of the program and said the class has helped him see what he is capable of.

“It was cool doing it for the first time last year and then seeing the outcome,” Raymond said. “It was new to me, so I didn’t know I was able to do something like that.”

Raymond and his classmates displayed their work all weekend at World of Wheels. The students also participated in “Student Day,” during which they met professional auto body mechanics and learned more about career options.

“They have speakers come from different hot-rod shops from all around Kansas City,” Wiederholt said. “They talk about the people that they hire and the different things that they can go into.”

This isn’t the first car Wiederholt and his students have repaired, and it certainly won’t be the last. According to Wiederholt, he intends to sell the Nash and buy a rare ’67 Plymouth Belvedere for the next class to work on.

We thank The Maryville Forum for reprint permission.