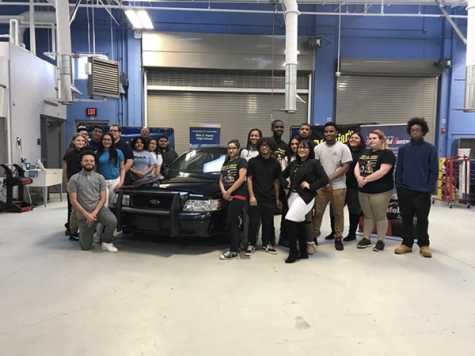 During the joyous, raucous celebration of the 2016 Cavaliers championship on the streets of downtown Cleveland, OH, fans destroyed a police cruiser.

This was small potatoes compared to the revelry and mayhem in Philadelphia Feb. 4, but the cruiser's damage in Cleveland was nevertheless considered extensive and beyond repair. Two people were arrested.

But the story has a happy ending.

Boykin approached the city about letting his auto body students try their hand at repairing the damaged vehicle.

For the past year and a half, students have been working on a complete refurbishing effort: sanding, painting and buffing the exterior and replacing its roof, hood and side panels. Fox 8 reported that materials were donated by Sherwin Williams, Safelite Auto Glass, Meguiar’s, Dollar Bank and United Sales.

And recently, the students completed the repair and returned it to the Cleveland Police. It'll reportedly be put back into service as a zone car.

The city's Division of Motor Vehicle Maintenance Commissioner Jeff Brown was ecstatic. He'd pegged the vehicle as totaled and said the city had planned to scrap it for parts, and that the Max Hayes students' work saved the city about $10,000.

“It's absolutely fantastic,” he said.